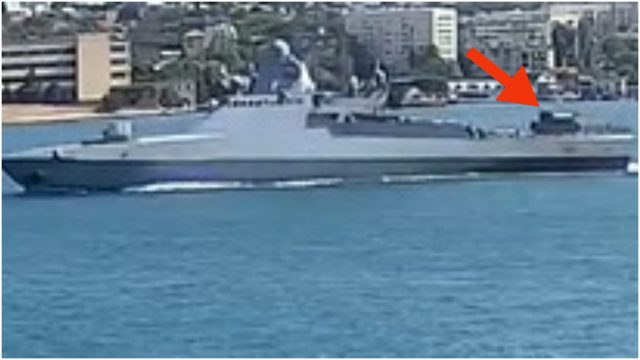 Russia has shown in Ukraine that it does not have the high-tech army that its propaganda has promoted for many years. Those who watched the war saw Russian tanks with metal grates welded on top of them, trucks with logs caught in the front and armored from the 1960s.

Recently, a “state-of-the-art” corvette of Russia’s Black Sea naval forces was photographed with an interesting “accessory” attached to the back. It seems that Russian ships do not have such secure air defense systems, so they were supplemented in the case of a Vasily Bykov class corvette (Project 22160). On the aft deck of the ship, where helicopters usually land, the Russians fixed a Tor-SC15 anti-aircraft ground system with chains.

The measure was most likely taken so that the ship would not suffer the same fate as the Moskva cruiser, sunk by Ukrainian-made Neptune anti-ship missiles. They are not very advanced by Western standards, but even so they managed to defeat the ship’s defensive systems.

Ukraine now has more advanced missiles, Harpoon models delivered by Denmark. These are difficult to counteract and could lead to the sinking of other major Russian ships in the Black Sea.

The Tor-SC15 system has 16 missiles with a maximum range of 15 km. The weapon is effective against airplanes, helicopters, drones and anti-ship missiles.

Read:  Avoid occasional craftsmen and only turn to professionals for the installation of your home fireplace or stove! (P)

However, military experts from The War Zone say that this Russian-designed defense measure is far from ideal. The radar of the Tor-SC15 system is partially blocked by the ship’s superstructure, so there are areas that are not covered. Moreover, during a storm, the accuracy of the weapon suffers greatly due to the movements of the ship. In fact, Moscow was successfully attacked in bad weather.

Russia’s Black Sea Fleet includes four Project 22160 class ships. A corvette is a smaller ship than a frigate, but larger than a star or torpedo boat, which usually operates near the shore.