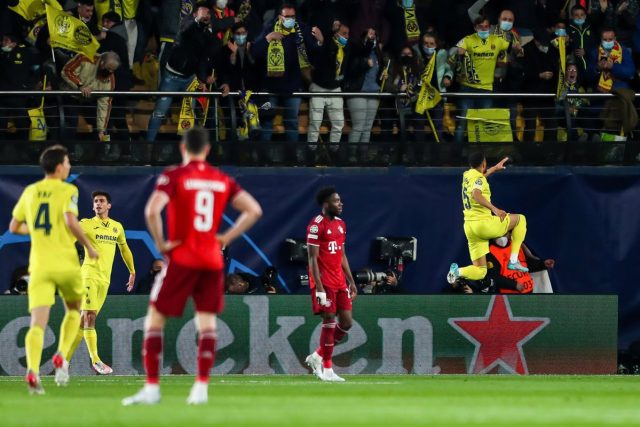 Villarreal grows in the Champions League at the expense of Bayern

Villarreal beat Bayern Munich (1-0) this Wednesday in the first leg of the Champions League quarterfinals, a party at the La Cerámica Stadium that could have been bigger with a little more success but an impeccable performance against German giant, minimized although still alive with only Danjuma’s goal at eight minutes.

Unai Emery’s team embroidered it, some had the Bavarian team as it could not be otherwise, and endorsed Bayern their first defeat away from home in the Champions League since 2017. In addition to the goal, the Europa League champion had a goal disallowed to Coquelin, a stick from Gerard Moreno and the best chances to have achieved better loot for the return leg in Munich next week.

The ‘Submarino’ jumped with everything in his third presence in this round of the maximum continental competition and the wind was favorable from 1-0 after eight minutes. The start could seem dangerous for Emery’s men, a back and forth with a lot of rhythm, but Villarreal showed punch and quality in a game.

The six-time European champion did not know where the danger was coming from when Moreno put the ball to Lo Celso, the Argentine gave it back to Parejo and the Madrid player made an intentional shot that Danjuma crossed to send it into the net. Villarreal’s rush lasted the entire game, which they sent and barely suffered behind.

Read:  Barça must measure its euphoria against Galatasaray

Emery’s team threw the German game to the wings, with centers without a shot, and took care not to back down too much. With the pressure up, it was very disturbing and on the verge of half-time, in a slow play, Coquelin made it 2-0. The Frenchman took a center with his left foot from the band that was poisoning until he saw the door, but the VAR annulled it due to an offside shoulder.

With no news of Coman, Müller or Lewandowski, with a run by a Musiala who was not comfortable too withdrawn for his virtues, Bayern went to the locker room giving thanks for the 1-0. Those of Emery, with Moreno open up and offering continuity to the plays, Lo Celso inspired and a block together without conceding, arrived at the second half knowing that Bayern was going to wake up.

Julian Nagelsmann’s team took a few minutes to get their first chance, biting higher up, with a left-footed shot from Gnabry that Müller did not catch like so many others in the small area. The game returned with that back and forth, this time without success, but with clear options for both. Villarreal forgave even more, with a ball off the post by Moreno and another very good one that Alphonso Davies took from him.

Read:  Marc Márquez: "It's a shame, but not racing was the best decision"

In a gift from Neuer far from his goal, Gerard Moreno tried from almost the center of the field without a goalkeeper but he narrowly missed it. The game went crazy and Bayern could also punish through Davis, Coman and Goretzka, without the punch that the German machine usually has. The ‘Submarine’ saw the bet and raised it, but Danjuma didn’t take advantage of his either, reaching the final stretch.

The game calmed down, for the good of Emery’s health, and the last one was for Pedraza. Villarreal was left with the bittersweet taste of a triumph to remember, but it could have been greater, and Bayern returned knowing that in Vila-real they play a lot of football. With Goretzka bleeding in the area due to an elbow from Pau Torres, a game ended that makes the yellow team a little bigger.