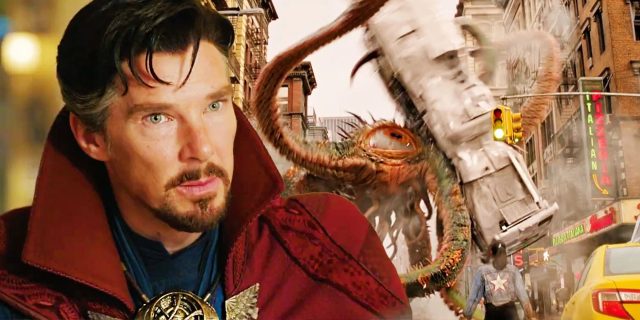 A new trailer for “Doctor Strange in the Multiverse of Madness” shows Strange throwing a bus over Gargantos.

The sequel to the first part of “Doctor Strange” comes from director Sam Raimi and brings Benedict Cumberbatch back to the big screen, with a side cast that includes Elizabeth Olsen, Chiwetel Ejiofor, Benedict Wong, Rachel McAdams, Xochitl Gomez and Michael Stuhlbarg. . We recall that the character played by Cumberbatch last appeared in “Spider-Man: No Way Home”, where the Master of Mystical Arts opened the multiverse.

What to expect from “Doctor Strange in the Multiverse of Madness”

In the new trailer for “Doctor Strange in the Multiverse of Madness” from Marvel, Strange is seen fighting Gargantos on the streets of New York, finally using his magical powers to throw a bus at the creature . Also included in the footage are some images of Scarlet Witch played by Olsen, as well as a new dialogue that specifically refers to the multiverse, with Wanda telling Strange, “Try not to destroy the multiverse, Stephen ”. Scarlet Witch also appeared in the Disney + series “WandaVision”.

There has been much speculation about the appearances and cameos of other MCU characters, including Patrick Stewart as Professor X. However, what we know for sure is that Gargantos, Rintrah and America Chavez appear in the second part. a franchisee.

About two weeks before its official release, “Doctor Strange in the Multiverse” “threw” new teasers at fans. As with “Avengers: Endgame”, the studio will not screen the entire film until its May premiere, in an effort to keep the script hidden.

Although there will be leaks of information, as always, it can be said that “Doctor Strange in the Multiverse” has managed to keep its secrets well hidden, so that there are no spoilers that could spoil the pleasure of watching the movie in movie theaters.

Read:  Toyota does not get rid of problems: what happens to production after the earthquake