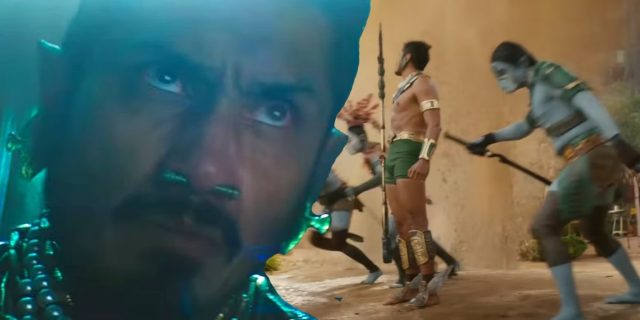 Marvel released the first trailer for Black Panther: Wakanda Forever at San Diego Comic-Con 2022, revealing that Namor’s appearance is quite different from the one in the comics.

The Black Panther: Wakanda Forever trailer has brought up quite a few important details. The Kingdom of Wakanda is clearly mourning the loss of King T’Challa, with the teaser paying tribute to both the character of T’Challa and the late actor, Chadwick Boseman.

Wakanda now appears to face a much greater threat, one that looms alongside the grief it has suffered. The Wakanda Forever trailer also confirmed that the long-rumored kingdom of Atlantis, ruled by Namor, will be an integral part of the new action. As longtime enemies of the Wakandan nation, it’s unlikely that Atlantis, as well as Namor, won’t attack Wakanda.

We note that Marvel has decided to make changes from the comics, and these take the form of Namor’s redesigned appearance in Black Panther: Wakanda Forever.

The new concept art has been “out of lock and key” for a while now, and has since been circulating the internet unabated, showing off the new look of Namor, played by Tenoch Huerta.

The trailer only confirmed the accuracy of the “rumors”. Avid comic readers might be surprised to see how different Namor looks in the Black Panther 2 trailer.

Read:  Dacia, between a warm and a cold one: the figures that show you the reality of the Mioveni manufacturer

Namor has had a few different appearances in the comics over the years. In his earliest depictions, he wore green or gold bikinis. Since then, Namor’s appearance has evolved in various ways.

Currently, Namor wears quite a bit of black in the comics (and more clothing in general, though he is still much less clothed than other superheroes).

In the meantime, you’ll be happy to know that Black Panther 2 will be released in theaters on November 11, 2022.