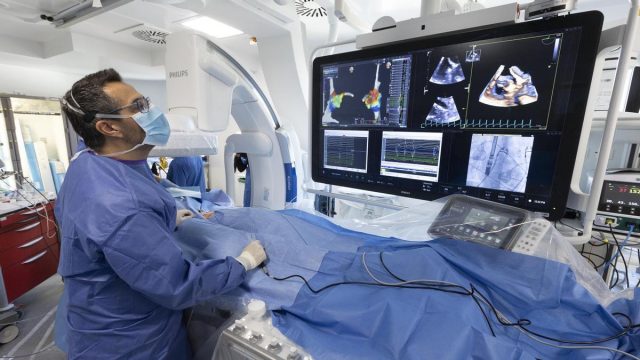 The Vall d’Hebron Hospital (Barcelona) and General Electric Healthcare, a leading multinational company in cardiac imaging, have co-developed the first 4D transesophageal probe. in the world that allows the exploration of the heart of all the pediatric patients: from infants from five kilograms to adolescents. It is called 9VT-D.

“The new 9VTD transesophageal probe has a outstanding image quality, which offers a exact correlation between cardiac imaging and patient anatomy, allowing for more accurate planning of surgical interventions and catheterizations that best suits the individual child. And all this with a minimum size, which allows it to be used even in newborns weighing five kilograms or more,” he emphasizes. Ferran Rosés, clinical head of Pediatric Cardiology at Vall d’Hebron, a CSUR reference center in Catalonia in the care of pediatric patients with cardiac disease and the only center in Catalonia with a pediatric heart failure program and pediatric heart transplantation.

Read:  When is it not possible to donate blood?

“The new 9VT-D probe technology has been constructed in a way. miniaturized, bundling the latest 4D technology into a flexible probe that has a diameter of 3.5 millimeters, compared to more than 10 millimeters for the probe used for the adult patient. Because of this thickness, the adult 4D transesophageal probe could not be used in patients of less than 20 kilograms, in which a 2D transesophageal probe, which offers less information and image detail, was used until now,” states Gemma Giralt, pediatric cardiologist at Vall d’Hebron.

Transesophageal ultrasound employs. ultrasound to produce an image of the heart and see how it works, just like the conventional transthoracic echocardiography, but the sound waves are sent through a tube that is introduced through the mouth and throat and into the esophagus. In this way, the cardiac structures are appreciated. much more accurately, as the heart is in contact with the esophagus and skin fat, ribs and lungs do not hinder the ultrasound.

The 9VT-D zone offers three-dimensional images with real-time motion of the heart, has a length of 90 centimeters and allows for a field of 90-degree field of view. In addition to a vivid image quality, comparable to that of an MRI, has applications such as dual crop, which allows simultaneous viewing of the selected section of the heart from two perspectives (e.g., from the ventricle and from the aorta). It also has 4D markers for marking points that act as a guide during ultrasound and are held at the changing the image from two-dimensional to 4D.