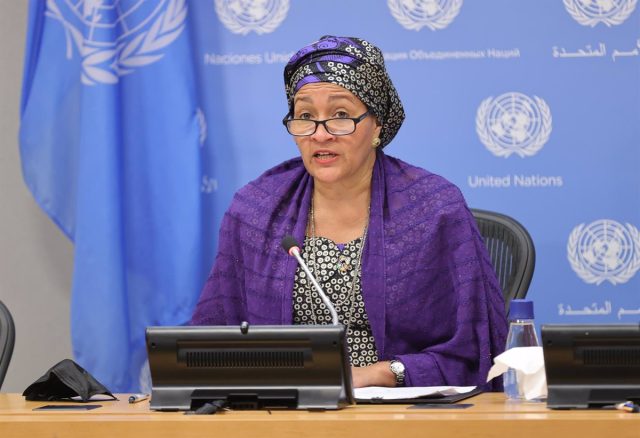 UN Deputy Secretary-General Amina Mohammed on Wednesday asked the Ethiopian government to hold peace talks with all parties involved to “end the ongoing atrocities” in the context of the conflict in Tigray.

This was done in a brief appearance before the press in the Ethiopian capital, Addis Ababa, after a visit to the African country that lasted five days and during which he attended, on behalf of the UN Secretary General, António Guterres , to the summit of the African Union (AU).

Mohammed has visited the Afar, Amhara and Tigray regions and has met with the leader of the Popular Front for the Liberation of Tigray (TPLF), Debretsion Gebremichael, and other regional leaders, according to the ‘Addis Standard’ newspaper.

The deputy secretary general of the United Nations has pointed out that “peace is essential” in the African country and has reiterated that the price for the conflict is “too high”, while she has lamented that children and women are “the most vulnerable ” in this context.

More than nine million people in the three northern regions of the country affected by the conflict require humanitarian assistance to feed themselves, the highest number since the conflict began.

During his visit he has also met with rape survivors and has highlighted the “psychological and physical effects” that these acts have on women. “These stories have to be told. We need to know that there are no winners in conflicts,” she insisted.

Mohammed has also been able to verify some aspects of the Ethiopian health system and, in a health center that she has visited, she has been informed of the lack of supply of gloves or test tubes.

He also highlighted the drought in the Somali region which, among other things, has put thousands of children and their families at risk. The persistent drought will leave more than 6.8 million people with urgent humanitarian needs by mid-March.

Also in Somali, he has visited displaced persons and has praised the population of the region for maintaining peace, emphasizing that they are an example for other communities in Africa.

Read:  Castillo approves program to expel "all foreigners" who commit crimes in Peru

Mohammed has visited Ethiopia after Guterres’ latest call for a cessation of hostilities in Ethiopia. However, there has been no tangible progress between the parties to end the conflict.

The conflict began on November 4, 2020 when Ethiopian Prime Minister Abiy Ahmed ordered a military offensive in retaliation for the attack on the army base in the Tigray capital Mekelle, after months of tensions between the TPLF and the central government in around the postponement of the parliamentary elections, finally held in June and in which Abiy achieved an overwhelming victory in the face of calls for a boycott and the lack of voting in several areas –including Tigray– due to insecurity.

However, the TPLF made significant progress in June that allowed it to retake Mekelle, after which Abiy announced a unilateral ceasefire citing humanitarian reasons, rejected by the group, which expanded its offensive to the adjacent Amhara and Afar regions, raising fears a spread of the war to the rest of the country.