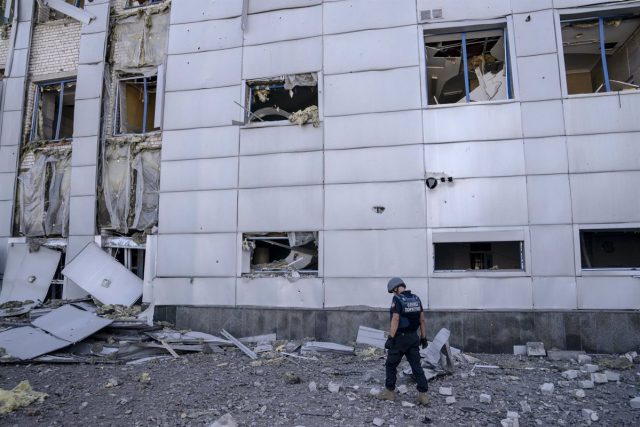 The Ukrainian National Police in the Kharkov region late Tuesday denounced that Russian troops have allegedly organized “torture camps” in the town of Balaklia after Ukraine has recaptured the town in recent days because of its counteroffensive in the east of the country.

This was stated by Sergei Bolvinov, head of the Investigative Department of the Ukrainian National Police in Kharkov, in a statement, in which he pointed to evidence that the Russian army had used the basements of some buildings as a prison and as a place to torture some locals.

“During the occupation, the Russians always held at least 40 people captive, feeding them twice a day and with nothing else. They were searching through local collaborators for those who served or had relatives in the Ukrainian secret services,” Bolvinov has detailed.

Also, the Russian military would have been looking for people who had helped the Ukrainian Army at the front, according to the head of the Ukrainian Police Investigation Department in Kharkov.

“In case they let a lot of people out and there were no new ones, they grabbed people in the street near the Police station. One man was in ‘prison’ for 46 days because Russian troops found a photo of his brother in a Ukrainian military uniform,” Bolvinov has added, detailing that torture with electricity was one of the “softest” tortures carried out by the Russian military.

Read:  Johnson expresses "fervent support" for Truss and calls on Tories to back her successor's program

In this regard, Ukrainian Police officers have claimed that the Russian Army in Balaklia fired on citizens from checkpoints during their last day in the city, before Ukrainian troops regained control of part of Kharkov.

“All the details of the clash are still being clarified. This Tuesday, together with journalists from all over the world and members of the National Police, we are covering the tragedy in Balaklia, because the whole world should know what kind of inhumane people these racists are,” Bolvinov concluded.