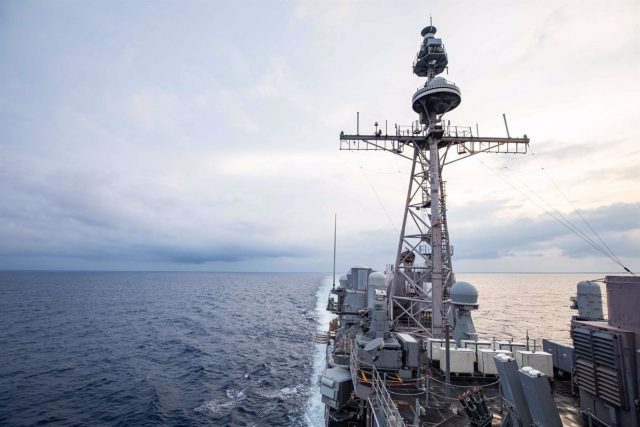 Two U.S. Navy warships have sailed this Sunday through the Taiwan Strait, for the first time since House Speaker Nancy Pelosi visited the island, raising tensions in the region over repeated military exercises by China.

“The Ticonderoga-class guided-missile cruisers USS Antietam (CG 54) and USS Chancellorsville (CG 62) are conducting a routine transit through the Taiwan Strait on Aug. 28 (local time) through waters where the freedoms of navigation and overflight on the high seas apply in accordance with international law,” the U.S. Seventh Fleet has made known in a statement.

The transit of both ships has occurred through a corridor “that is beyond the territorial sea of any coastal state,” the missive justifies.

In this regard, Washington explains that these actions “demonstrate the commitment of the United States to a free and open Indo-Pacific.” “The U.S. military flies, sails, and operates anywhere that international law permits,” the statement concludes.

Read:  Estonia bans the display of the ribbon of Saint George and the letter 'Z' as symbols of the Russian invasion

The United States regularly sends ships in this region: in October 2018, in April 2019 and in December 2020, it moved two ships on each occasion, reports the ‘Japan Times’ newspaper.

The U.S. Seventh Fleet is the largest war fleet in the U.S., being the most equipped and manned. The main base is in Yokosuka, Japan, although it also has units deployed in South Korea.

Following Pelosi’s landing on the Asian island on August 2, China announced four days of military exercises in six areas surrounding the island. These maneuvers included the launching of ballistic missiles, as well as numerous warships and fighter jets that broke the line between Taiwan and mainland China.

Read:  Chilean president's brother "stable" after being assaulted by a group of youths

Shortly after the shipping operation was unveiled, Taiwan’s Ministry of Defense has confirmed a new approach of Chinese Army warships and fighter jets to its maritime and air security zone, as has become common in recent months.

On this occasion, the Ministry of Defense has identified eight ships and 23 aircraft, of which a dozen arrived to temporarily cross the median that separates the Taiwan Strait and marks the beginning of the island’s air security zone.

As it usually does, Taiwan has responded by declaring an alert to its forces and warning Chinese aircraft and ships to fall back positions immediately, according to the ministry’s statement, reported on its Twitter account.