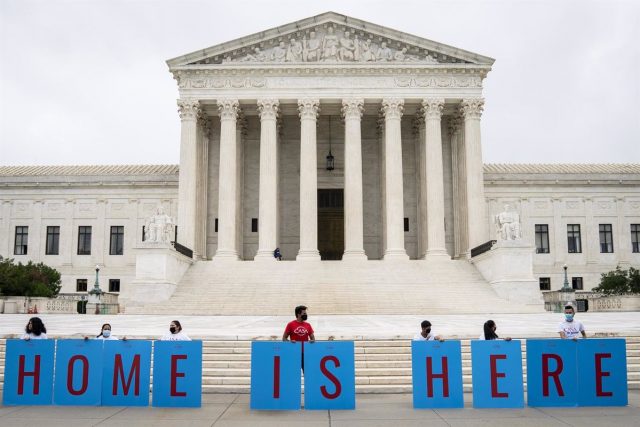 A U.S. federal appeals court on Wednesday granted a temporary stay to hundreds of thousands of young immigrants enrolled in a program that allows them to work and study in the United States without fear of deportation.

The decade-old Deferred Action for Childhood Arrivals (DACA) program has been declared illegal by the U.S. Federal Court of Appeals for the Fifth Circuit, which has prohibited the program from being assigned to new people, without affecting the young people who are already benefiting from the measure, as reported by NBC.

The program will have to go to a lower court for review after U.S. President Joe Biden sanctioned the program in the federal register. In 2012, former President Barack Obama established DACA by executive order after the measure failed to make it through Congress.

Read:  A group of women protest openly in Kabul against the use of the burqa

The revised rule could preserve DACA for at least several more months, although it is possible that, given the current composition of the Supreme Court, the program will ultimately be eliminated.

Following the U.S. federal court’s announcement, Biden has expressed disappointment, while detailing that the lives of beneficiaries have been left in “limbo.”

“Today’s decision is the result of continued efforts by Republican state officials to strip DACA recipients of the protections and work authorization that many have had for more than a decade,” the U.S. president said in a White House statement.

Read:  The Pentagon confirms that the Russian president is not "fully informed" by the Ministry of Defense

“While we will use the tools we have to allow beneficiaries to live and work in the only country they know as home, it is time for Congress to pass permanent protections for them, including a path to citizenship,” Biden added.