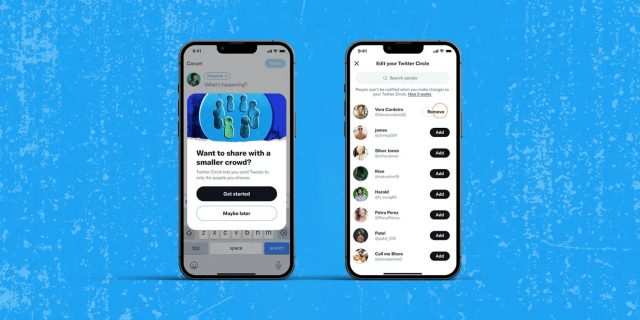 Still in the testing phase, the new functionality aims to resolve the dissatisfaction of users who would like to share messages on Twitter, without them being really public. In other words, visible only in a limited circle of friends and acquaintances.

Twitter Circle offers exactly this service, allowing you to share posts that can only be viewed by “eyebrow-picked” users by manually selecting them from your contact list. And so that the privileged nature of this option does not get out of control, Twitter will limit your circle of “friends” to a maximum of 150 contacts.

By giving even more weight to the posts thus distributed, the messages will be marked in a clearly visible way, ensuring that all recipients do not read any Tweet.

As for how to organize your circles of friends on Twitter, you’ll be able to add or remove anyone from this list without an informational message being sent automatically. Thus, the “privileged” will only find out when they start receiving properly marked tweets. These will also appear in the content feed, marked in green.

Once received, such a tweet can only be viewed, not redistributed, the information being considered “confidential” in the circle of contacts selected by the author.

Read:  For the first time, TikTok will share advertising revenue with the creators who generate it