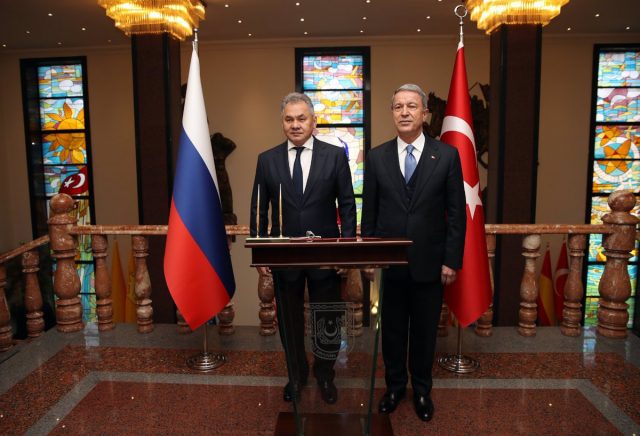 The defense ministers of Turkey and Russia, Hulusi Akar and Sergei Shoigu, respectively, held a meeting this Friday in the Turkish city of Istanbul where they addressed the situation in Syria and stressed the need to maintain a ceasefire.

As reported by the Russian Defense Ministry in a statement, the authorities of the two countries are “constantly in contact on this issue at all levels,” the Russian news agency Interfax reported.

Shoigu has also conveyed Russia’s concern regarding the presence of U.S. troops on Syrian territory, a stay which he considers as “a violation of international norms”, even more so taking into account alleged links of the U.S. troops with “militants of terrorist formations”.

“The US Army (…) is actually stealing minerals from a sovereign state,” Shoigu added, who believes that Washington orders its troops to seize several Syrian mining areas.

Also with regard to the United States, the Russian Defense Minister has highlighted the illegality of the sanctions applied by Washington against the government of Bashar al-Assad, measures that only aggravate the humanitarian situation in the country.

These contacts between Akar and Shoigu come in the same week that Russian President Vladimir Putin has traveled to Iran along with his Turkish counterpart Recep Tayyip Erdogan to meet in Tehran with Iranian President Ebrahim Raisi and other senior Iranian officials with Syria, and other issues, on the agenda.

Read:  Elon Musk tells Twitter of his intention to terminate the purchase agreement

In addition, Shoigu’s visit to Istanbul is framed in the act of rubrication of Russia, Ukraine, Turkey and the United Nations on an agreement for the export of grain from Ukrainian ports, blocked by the Russian Army in the framework of the war in its neighboring country.