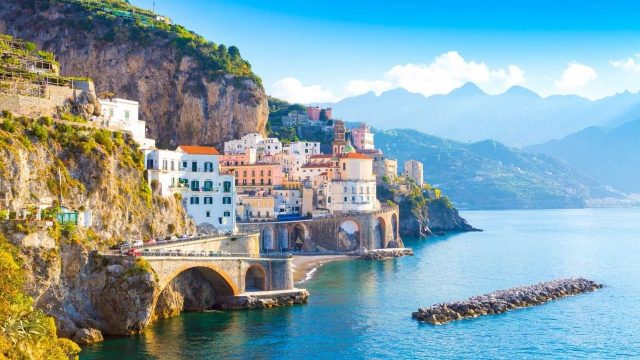 A country with delicious delicacies and wonderful views, Italy has a rich and varied history that has made it a favorite holiday destination for many tourists.

Everyone knows that it is the birthplace of pizza and hosts the oldest university in the world, but not many people know that there is a free wine fountain.

Fortunately, we’ve prepared 10 things you didn’t know about Italy to impress your friends with.

Although China invented the first prototype of fireworks, made of dried bamboo stalks around 200 BC, it was actually the Italians who learned how to add color to them much later, in the 1830’s. Adding metal salts In gunpowder, they found that when the salts were exposed to a flame, each produced a different color. Sodium produces yellow, strontium produces red, and barium produces green. This discovery advanced the use of fireworks and allowed for more elaborate and colorful performances around the world.

Italy is synonymous with exceptional food, so it makes sense for this country to hold the world record for finding the biggest white truffle. Located in Umbria, the truffle weighed 1.89 kg! A treasure worthy of an auction so the huge truffle sold for $ 61,250 to a Taiwanese buyer, with the proceeds going to charities.

The fountain of dreams! In a small vineyard in Dora Sarchese in the Abruzzo region there is a fountain that has red wine on tap 24 hours a day. Installed with the help of a local non-profit organization, the fountain was built to promote tourism in the region and to preserve the historic pilgrimage route Cammino di San Tommaso, the Way of St. Thomas. This 315km route, made up of various churches and monasteries, connects the city of Ortona with St. Peter’s Basilica in the Vatican.

Read:  The Mandalorian remains a fan favourite on Disney+: which Star Wars productions it has surpassed

Although small in size, Italy has more UNESCO World Heritage sites than any other country – 53 to be precise. If we think about the history of the Roman Empire, it is not very surprising. A holiday in Italy is the perfect opportunity to visit the ancient ruins, the botanical gardens, the eternal cities and the impressive mountains of this incredible country.

Pet lovers can enjoy! Or more precisely, cat lovers. The Eternal City is not only full of historical artifacts, but also cats. Our friendly cats are considered an attraction for Rome. Anyone caught killing a cat risks a fine of 10,000 euros and up to 3 years in prison.

Many assume that Alexander Bell was the inventor of the first telephone. However, it was an Italian scientist, Antonio Meucci, who first came up with the concept of the talking telegraph in 1849. In 1871 he announced his invention but until 1876 he could not afford to record it as being his and ownership of the invention reverted to Alexander Bell instead. The Italian government has since recognized Meucci’s role in development, honoring him as the “official inventor of the telephone.”

Somewhere between Venice and Lido, in the Venetian Lagoon, is the island of Poveglia. This beautiful place has a dark history. From 1793 to 1814 it was used as a quarantine site to house over 160,000 plague-infected people. Almost 100 years later, in 1922, an asylum was built on the island, but there are rumors that the doctor hired to treat patients used questionable methods, such as lobotomies and torturous practices. Finally, the doctor died in 1968, when the hospital closed and the island was abandoned. Poveglia is still closed to visitors today.

Read:  The cool PlayStation 5 games will look even better: the update you've been wanting since day one

Christopher Colombus, or Cristoforo Colombo, was the Italian explorer who “discovered America” ​​on a journey that took a wrong turn. However, his legacy as an Italian explorer is not unique. Venetian merchant Marco Polo went on a trip to China and stayed with Genghis Khan’s nephew; his travel stories have been turned into a book that has inspired other explorers, such as Columbus. And the Americas were even named after the Italian explorer Amerigo Vespucci.

The prestigious Academy Awards, or more commonly known as the Oscars, have existed since 1929. At that time, Italy was the country with the most winners in the category of “Best Foreign Film”. With 31 nominations and 14 Oscars won, Italy is also the first country to win the Best Foreign Language Film Award.

A sport created during the Renaissance and still played with great pride by Italians and today is calcio storico. This game is very similar to football, rugby and lacrosse, but much bloodier and more brutal. During the 50 minutes, two teams of 27 men fight to score a goal in the opponent’s net and to defend their own team, regardless of the physical cost. Broken bones and bloody wounds are not uncommon. Take a trip to Florence to witness this bloody and magnificent spectacle!