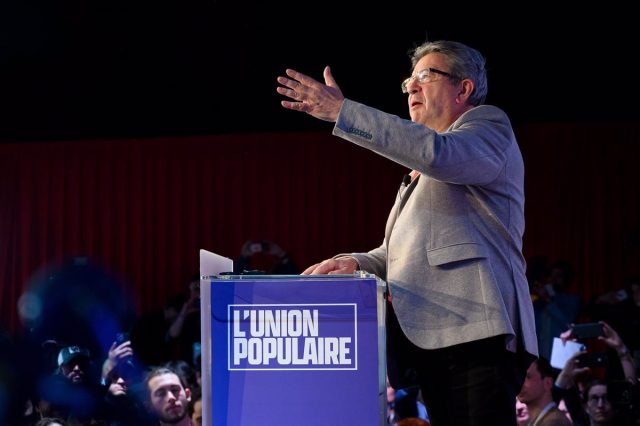 The voters of the candidate of the leftist France Insumisa party, Jean-Luc Mélenchon –the third political force in the first round of the presidential elections– are emerging as a key element in the second round of the elections, which will face the current president, Emmanuel Macron, and the far-right Marine Le Pen.

The fact that Mélenchon did not qualify for the second round and the collapse of the Socialist Party — whose candidate, the mayor of Paris, Anne Hidalgo, collected close to two percent of the ballots — leaves left-wing voters facing possibility of voting for Macron, a center-right liberal politician, and Le Pen, a candidate for the far-right National Rally.

Thus, the fate of these votes is emerging as an essential issue in the second round, which in France is characterized by the use of the so-called ‘useful vote’, which in practice would lead to greater support for Macron destined from the left to prevent the extreme right from accessing the Elysee.

The results obtained by the candidate of France Insumisa have left him as the main representative of the left, after doubling the combined votes of the candidates of The Greens, the Socialist Party, the Communist Party, the New Anti-Capitalist Party and the Workers’ Struggle, which increases its pivotal role in the face of the vote.

Mélenchon, who won nearly 22 percent of the vote –behind Macron’s 27.85 percent and Le Pen’s 23.15 percent–, has maintained an ambiguous position ahead of the second round of this Sunday and, although he has not openly advocated supporting the president, he has emphasized the need not to abstain.

“Do not refrain, continue to be actors in this story,” he said in an interview granted on Tuesday to the television network BFM TV in which he also asked his followers not to vote for Le Pen, which is a tacit support for Macron. as the only non-excluded option. In fact, he stressed that he “understands” those who do not want to vote for the president.

In fact, a consultation carried out in recent days among members of the leftist party reveals that only 33.4 percent of them plan to vote for Macron, while the rest would opt for the white or null vote or abstention, according to the results. published on the Mélenchon campaign website. More than 215,000 people participated in the consultation.

“The results of this consultation are not a slogan given to anyone. It indicates what the appreciations of the 215,292 people who participated are. Each one will draw conclusions and vote conscientiously, as they consider,” the website highlights in a message prior to the detailed results. for options, which do not include the option of leaning towards Le Pen.

By contrast, a poll published on Saturday by IPSOS-Sopra-Steria showed that 33 percent of Mélenchon voters would support Macron, with 16 percent leaning toward Le Pen and 50 percent refusing to say what they plan to do. on Sunday.

In this sense, Mélenchon stated in his interview with BFM TV, in a message addressed to his supporters, that voting in the second round in favor of the far-right candidate would mean “a total contradiction” with the electoral program of the leftist formation, in a new message that could tip the balance.

Mélenchon’s program, known as ‘Our common destiny’, was promoted with the aim of being accepted by all the leftist formations in the face of a possible coalition, which was ultimately not achieved. In addition, the candidate also benefited from a “useful vote” in the first round due to the erosion of other formations and the perception that he was the only one with options to go to the second round.

All this leaves Macron and Le Pen trying to fish in the leftist fishing ground in France, after the country was practically fragmented into three between the support for Macron, that accumulated by far-right candidates and that collected by left-wing parties.

In total, more than seven million people expressed their support for Mélenchon in the first round, which is an important block to consolidate the victory of either of the two contenders, although Macron starts with an advantage in the face of the historic positioning of the left against a right-wing access to power.

However, some voters in France Insoumise have been skeptical about the possibility of the president renewing his mandate for another five years after the policies applied in this five-year period and have even bet on the possibility of a change. “We have had five years of Macron, if we can prove something else…” one of them recently told FranceInfo.

This position would be contrary to the positions of Mélenchon, who since the results of the first round were published has influenced his message “not one vote for Le Pen”. The situation is similar to that of 2017, when Macron and Le Pen also faced each other in a second round in which the center-right candidate emerged the winner.

Read:  Turkey says that "some NATO countries" want the war in Ukraine to continue so that Russia "is weakened"

Despite this, sources from the National Group have shown their optimism about the results of the survey carried out by France Insumisa and have emphasized that only a third of voters have openly supported Macron. “Everything is open. Le Pen could do very well on Sunday,” a party spokesman, Philippe Ballard, said recently.

In the poll carried out in 2017 before the second round, 18 percent of the participants opted to vote for Le Pen – an option not contemplated this year -, although only 7 percent finally materialized it at the polls. . This year the situation could be different due to Macron’s attrition and unpopularity with the left.

“In 2017 the drag was seven percent. I think (this year it will be much higher),” explained the French political scientist Rémi Lefebvre in statements to the newspaper ‘Le Monde’. “Voting for Macron is asking a lot of many voters. There will be many abstentions,” he anticipated a week before the second round.

Along these lines, Lefebvre argued that “the policy of making things worse in order to improve one’s goals involves Mélenchon voters who identify with controversial positions on the left or right-wing ideologies”, although the candidate from France Insoumise focused his campaign on the leftist tradition, which “would somehow deactivate the votes in favor of Le Pen”. “The fact that he carried out a leftist campaign could increase the rate of abstention,” he concluded.

To this must be added that, according to a survey by OpinionWay-Kéa Partners for the newspaper ‘Les Echos’, it reveals that the participation rate would be around 69 percent, below the 74.6 percent of the second round of 2017, while that the repetition of the duel between the two candidates has lowered popular interest in the vote.

The poll also reflects that Macron would win 54 percent of the votes in the elections, compared to 46 percent for Le Pen –very far from the 66.1 and 33.9 percent of 2017, respectively–, which which reaffirms the importance of these last days of the campaign and the relevance of the fate that the ballot papers of Mélenchon’s party may take.