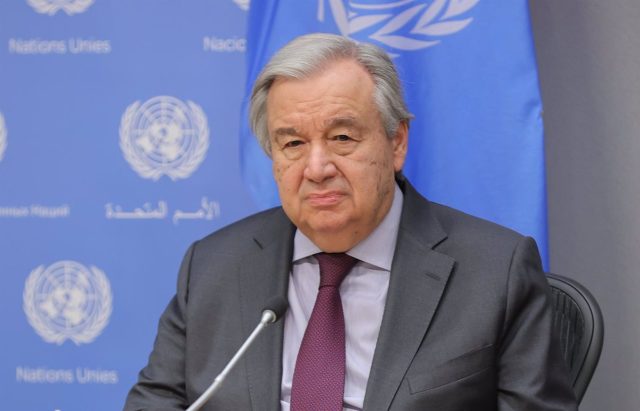 Guterres stresses that “it is not a regional or African issue, but a global threat”

The Secretary General of the United Nations, António Guterres, has called on the international community to “mobilize additional resources” to deal with the increase in the jihadist threat in the Sahel and has warned that the attacks in this area of ​​Africa “continue to increase”.

“At a time when terrorist attacks continue to increase in the Sahel and extend to the states in the Gulf of Guinea, the international community must realize that this is not a regional or African issue, but a global threat,” he said. saying.

Guterres, who is on an official visit to Niger, has indicated that he will continue working to “mobilize additional resources” and has emphasized in an appearance with the Nigerien president that “Niger cannot overcome all these challenges alone”.

“The African Union (AU), the G5 Sahel and the Economic Community of West African States (ECOWAS) are essential actors for peace, stability and development in the region, but today the G5 Sahel has been hit by coups in various neighboring countries,” he explained.

Read:  Guterres acknowledges that the Security Council "did not do everything in its power" to prevent war in Ukraine

Likewise, he has applauded “the courage” of the Nigerien security services in “the daily fight against terrorism and violent extremism” and has emphasized that “nothing can justify violence”. “Civilian populations are the first victims,” ​​Guterres said.

“The peace, stability and prosperity of Niger and the entire Sahel represent an absolute priority for the UN”, he pointed out, before emphasizing that “there are countries that have artificially maintained internal displacement for years that have created structural problems that today they have a difficult answer”.

However, he has emphasized that “regardless of the security dimension, the region is facing a multidimensional crisis of a strange magnitude and only a large, urgent and coordinated international mobilization will allow it to respond.”

“We must fight against the root causes, poverty, exclusion, impunity, food insecurity, the climate crisis, which exacerbate inter-community tensions and continue to fuel violent extremism and terrorism in many countries of the world, including in the Sahel” , he has argued.

“This calls for a global posture that simultaneously attacks underdevelopment and strengthens the link between peace, humanitarian aid and development”, he defended, before betting on applying the UN Integrated Strategy for the Sahel and acknowledging that “it is necessary recognize that the international community has fallen short.

In this sense, Guterres lamented that the financing of humanitarian and stabilization operations “is going down”, with the Humanitarian Response Plan for Niger in 2022 financed so far at 8.7 percent. “This is absolutely inconceivable”, he has criticized him.

“I ask all partners to ensure that our attention and our action in the region are maintained, despite the new crises that hit our world”, he said, while outlining the importance of acting in the face of the impact of the consequences of climate change.

“African countries, which are not responsible for the problem, see their lives affected by increasingly frequent droughts, floods and other extreme phenomena. Developed countries must fulfill their promise to allocate 100,000 million dollars (about 95,000 million euros) a year in the fight against climate change in developing countries”, he stressed.