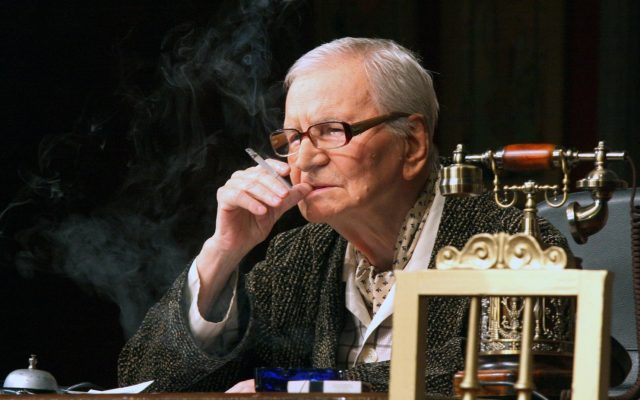 Master Radu Beligan’s secrets are out, and they put the great actor in the position of “British agent” or “mason”. Find out who made these accusations against one of Romania’s most famous actors.

Some people within the National Council for the Study of Security Archives have claimed that the Romanian actor came under the attention of the Romanian Securitate in the past. During the Communist period, as shown in archived documents from 1948, the State Security opened a file on the actor.

Read:  "Mrs Oscar" was accused of mysticism, but later repented. Dida Dragan loved enormously, but was left for Silvia Dumitrescu, who bears no grudges.

The man who was to become a big name on the Romanian stage was born on 14 December 1918 in Galbeni, Bacăul county. He had a brilliant career, being an actor on theatre, cinema, television and radio. It is known that he was of Greek origin on his mother’s side, and on his father’s side he was a descendant of one of Ion Creanga’s brothers.

Radu Beligan’s secrets that the Securitate thought he was hiding

In 2004, Radu Beligan became an honorary member of the Romanian Academy, and seven years later he received a star on the Bucharest Walk of Fame. On 15 December 2013, Radu Beligan is included in the Book of Records as the longest-serving actor still working on the theatre stage.

Read:  Mercedes announces an update for GLC: what autonomy will the hybrid model have

The famous actor died on 20 July 2016 in hospital, having been admitted to the Elias Hospital in Bucharest, suffering a cardio-respiratory arrest. Like many other artists who have passed away, he remains in the collective memory of Romanians.