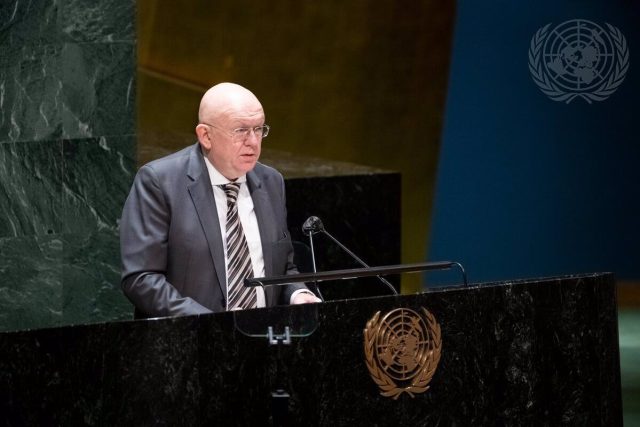 “The bodies have no signs of decomposition known to forensic experts,” Nebenzia said.

Russia’s permanent representative to the United Nations, Vasili Nebenzia, has assured that the Bucha massacre is “another staged provocation” aimed at “discrediting and dehumanizing” the Russian Armed Forces and leveling political pressure on Russia.

“There are no accredited reports of atrocities by the Russian Army in Bucha that happened before the Ukrainian Army took control of the city. Four days after the Russian Army abandoned the city of Bucha, there was not a single sign of ‘ atrocities'”, he stated at a press conference.

“If you look carefully, you will see that some of them (corpses) are moving. Some of them are showing signs of life. You cannot escape the realization that this is a set up, that it is a farce and a provocation,” he added. , as stated in a statement from the Russian mission to the UN.

Likewise, he has assured that they have “factual evidence” of this “false flag attack” and has explained that Russia’s intention was to present it to the Security Council “as soon as possible” so that “the international community is not fooled by the false narrative promoted by kyiv and its Western sponsors”.

Thus, Nebenzia has accused the ‘pro tempore’ presidency of the United Kingdom, as well as the United States, France, Ireland, Norway and Albania, of “inventing an invalid and lame pretext for not calling this meeting by insisting that it be postponed until Tuesday”.

Read:  Charles III is formally proclaimed as the new king of England.

“The UK Presidency openly rejected our request to convene a meeting on April 4. And they did so twice. As the situation around Bucha continued to evolve overnight, today we request an urgent meeting of the Council at 3 p.m. (New York time),” he said.

In this way, he has criticized that “while the discussion on Bucha is blocked, where there is a “clear provocation in the classic Goebbels style”, the Western delegations have called a meeting in this body on the closure of schools in Afghanistan.

“It would not benefit the Western cause if the meeting were called by Russia, because this would shake up the anti-Russian narrative that they are comfortably promoting. They prefer to ‘mix’ the situation in Bucha with the discussion of the humanitarian situation that they are calling tomorrow, to divert the focus from the provocation staged by the kyiv regime,” Nebenzia explained.

The Russian representative to the UN has described the behavior of the ‘pro tempore’ presidency of the Security Council as “shameful abuse” and has assured that this action seeks to “silence the voice of Russia”. “The abusive, condescending and colonialist line of the UK Presidency is undermining the very foundations of the UN,” he added.

With regard to the Bucha massacre, Nebenzia has once again explained what other Russian sources have already advanced, for which he has detailed that the troops withdrew on March 30, a fact confirmed by the mayor of the city.

“In his video of March 31, Anatoly Fedoruk (mayor) presented the withdrawal of the Russian forces as a victory of the Ukrainian Army. Interestingly, he did not mention mass atrocities, dead bodies, murders, graves or anything like that,” he said, adding that, in addition, in the video he comes out smiling.

“Let me also show a photo of Zhan Belenyuk, a deputy of the Ukrainian Parliament, who, according to his social media reports, visited Bucha after regaining control from the Ukrainian government. As you can see, he is smiling too,” he said. .

Nebenzia, in his narration of the events, has indicated that the videos released by the Ukrainian Army on April 2 do not show corpses in the streets. “They interviewed several people in different places in the city. None of them said a word about any ‘massacre’ or mass murder,” she said.

In addition, he has referred to a video that shows several bodies in the streets of the city and has said that “it is full of discrepancies and blatant lies”, since the bodies, according to the authors, were lying in the street for at least four days.

“However, the bodies are not rigid. How is that possible? It is against the law of biology. The bodies have no signs of decomposition known to forensic experts, including corpse stains. The wounds do not contain blood.” has argued.

“There is a video showing a conversation between members of Ukrainian units. It was posted on social networks by the so-called ‘territorial defense’, a radical nationalist fighting group. One of the radicals asks if he can shoot people without blue bands ( Ukrainian ID). The other confirms that this is allowed,” he added.

Finally, Nebenzia referred, during question time, to the pregnant woman at the Mariupol maternity hospital. “She admitted that she had been a fake. She is a Ukrainian blogger named Mariana. She admitted that it was fake, that they forced her to make that footage,” she has told her.