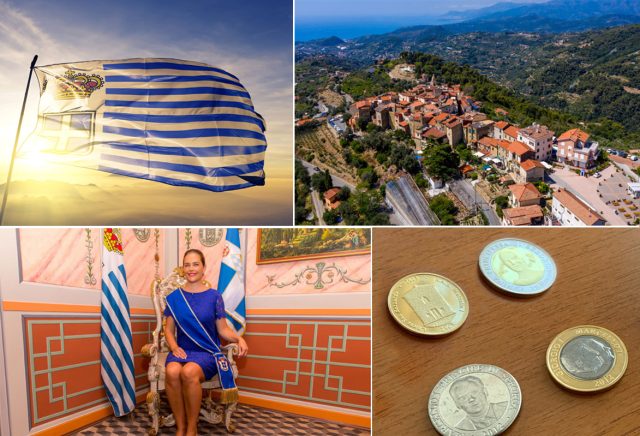 On top of an idyllic hill on the Italian Riviera is a small village with a big dream: to become an independent state. Find out which Italian village has the flag, anthem and even the monarch.

The Principality of Seborga already has its own flag, national anthem, passports, stamps, currency and, of course, a monarch. He hopes to one day support them with the legal recognition of his sovereignty, which he has been seeking since the 1960s.

For now, however, Seborga is simply a picturesque hamlet in the northern Italian province of Imperia, close to France, with just over 300 inhabitants and covering about 8 square kilometers. The road leading up to the city has an unofficial border crossing, complete with a sentry painted in the colors of the Seborga flag, which is occasionally led by self-proclaimed border guards.

Beautifully positioned, Seborga enjoys stunning views of the Riviera below, including the Principality of Monaco, perhaps the world’s most famous microstat and a source of inspiration for Seborga’s continued quest for independence.

In Seborga, where the monarchy is not hereditary, elections are held every seven years, and Princess Nina is the first woman to occupy the throne. Born in Germany, Nina Döbler Menegatto was living in Monaco when she discovered Seborga 15 years ago with her ex-husband and former prince, Marcello I, who abdicated in 2019.

Read:  Moon Knight, ready for release: when and where we can see it

The claim dates back to the early 1960s, when Giorgio Carbone, who ran a local flower farmers’ cooperative, researched the city’s history and found something was wrong. Seborga was donated to the Benedictine monks in 954, until they sold it in 1729 to the Kingdom of Sardinia, which would later become part of the Kingdom of Italy.

But according to Carbone, there is no historical record of the sale, which means that Seborga was never legitimately part of Italy. Both the Italian Constitutional Court and the European Court of Human Rights have previously rejected Seborga’s offer, but the princess is not discouraged.

Princess Nina admits that the story is good for business. She points out that there is nothing illegal in the Principality’s activities: passports are just for fun, and the local currency, Luigino, is accepted in stores in the city, but it is essentially a souvenir, say CNN.

In one way or another, these things put Seborga on the map, adding tourism to the cultivation of flowers and olives, the basic elements of the local economy. Carbone is fondly remembered. Before the pandemic hit, the city attracted tourists from Japan, albeit with a substantially different atmosphere from the glamor of nearby Monaco.

Read:  Peaky Blinders is back for one last season: when we can see it, what we know so far

Suitable for a monarchy, Seborga had its share of drama. In 2016, Nicolas Mutte, a French citizen, proclaimed himself the new prince while the royal couple was abroad, in an event described in the local press as a coup d’etat.

Mutte is just one of the few claimants to the throne who have appeared over the years. The principality publishes a list as a warning that includes social media profiles and websites, which often sell goods or coins, claiming to belong to the legitimate Seborgan government.

The government itself says it does not grant nobility titles and consists of only nine ministers, as well as a council of people born and raised here in Seborgen. They make their own laws, but so far they have no legal value, and the real power is in the hands of a regularly elected official.