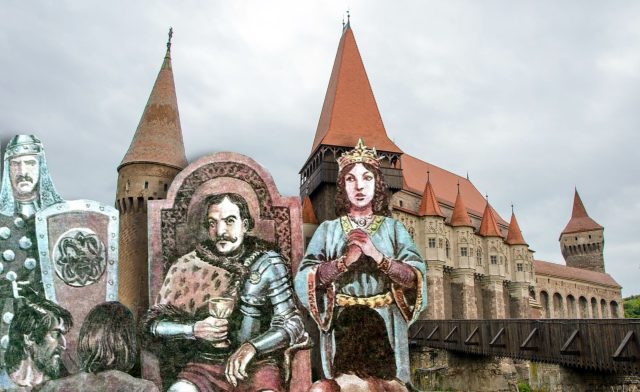 Corvin Castle houses a fountain that dates back six centuries and was built by the Turks. Find out what the punishment was for the Turks who managed to escape.

A legend tells us that the Turks built the fountain in the inner courtyard of the medieval castle. This fountain is over six centuries old and is said to have been excavated by the Turks. Ioan de Hunedoara would have promised them that if they found water, he would release them.

After 15 years of excavations, the Turks found water at a depth of 30 meters. In 1456, the voivode of Transylvania died, and his wife did not respect what was said, ordering the beheading of the three Turks. In the house of the fountain there is an inscription in Turkish that gave birth to this legend.

The thrilling place for most visitors to the Corvin Castle is the six-century-old fountain in the inner courtyard, which is said to have been built by three Turkish prisoners in the time of Iancu de Hunedoara. According to some legends, the Turks were killed after 15 years in which they dug into the rock and gave water, although they had been promised release.

“It is said about this fountain that it was dug by three Turkish prisoners that Ioan de Hunedoara was holding in the castle. John promises the three that he will set them free if they dig a well with good water. The prisoners, animated by the hope of release, dig in the rock for 15 years and at a depth of 28 meters they manage to find the precious water. However, John had died in the meantime, and his wife, Elisabeta Szilagyi, decided not to keep her word to her husband and did not release the three Turks and decided to kill them.

The prisoners, as a last wish, ask permission to write on the keys of the fountain an inscription: “You have water, no heart”, as a reproach for the promise made and broken. In fact, the inscription deciphered by Mihail Guboglu reads as follows: “The one who wrote it is Hassan, a prisoner of the gallows in the fortress next to the church.” The ancient Arabic characters contained in the inscription date it to the middle of the 15th century. The current position of the inscription is on one of the buttresses of the chapel “, according to castelulcorvinilor.ro.

This legend was born at the beginning of the 20th century, only it became popular when the volume “Historical stories for children, schoolchildren, falcons and pioneers” by Dumitru Almaș was published. After the Turks heard what their end would be, they asked for another three days to leave a writing in Turkish.

Read:  The Romanians, the most Dacian of the Dacians, some historians say: what does Trajan's Column have to do with it?

After three days, they were asked what they had written, answering, “You have water, you have no heart.” Finally, the prisoners told Iancu that his wife had promised them freedom. He replied that then, “let them be free! This promise is pure debt. And wherever you go, say that the owner of Hunedoara Castle also has water in the castle and human mercy in his heart ”.

This story circulated in the interwar period, being present in the reports dedicated to the castle. However, researchers believe that the fountain is actually a water cistern, and there are several theories as to what the construction of the well represents.

One of them shows that, following the excavations, the fountain was in fact a cistern, being extended through a tunnel that led to the river, not being a source in the respective rock. Also, the water that can be seen at the bottom of the well is just rainwater.