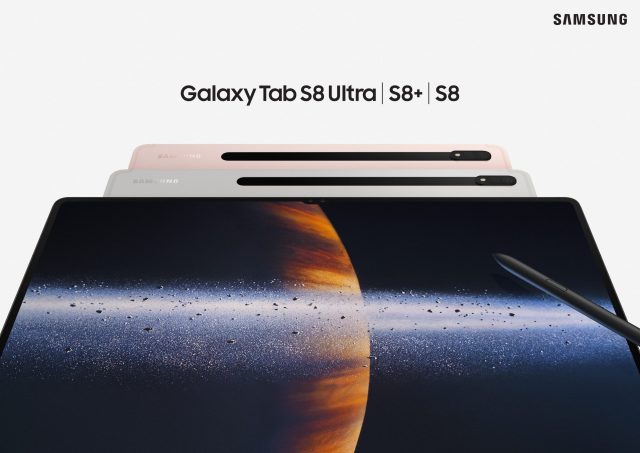 In addition to the three smartphones in the Galaxy S22 range, Samsung is launching three new tablets today in the new Galaxy Tab S8 series. These are the company’s most powerful tablets, equipped with top hardware and ready to compete with the range of iPad models in the higher ranges such as Air and Pro from Apple. For the first time, however, Samsung is launching a huge tablet, the Galaxy Tab S8 Ultra, with a 14.6 “screen, which happens to be the first” notch “screen in Samsung’s offering, which houses the two front cameras for calls. video.

During the presentation event I took part in, I could only see the Galaxy Tab S8 Ultra model, which seems to be thought of as a product that can completely replace a laptop. The tablet is compatible with the S-Pen for drawing, sketching or handwriting, as well as a magnetically connected keyboard that automatically activates the DeX desktop interface. Thus, the tablet can work in a very similar way to a laptop.

However, we are dealing with a huge tablet, for which you will have to use a large carrying case, compatible with a 15 ”laptop rather than an ultrabook. At 726 grams without a case and keyboard and over 1 kg with them, the Tab S8 Ultra exceeds certain ultrabooks in weight and size. Despite its large diagonal size, the tablet is also extremely thin, only 5.5 mm thick. Once you take it out of the case, it looks extremely fragile. It is only slightly thicker than the USB-C port for charging and connecting accessories.

The 14.6 ”screen benefits from a Super AMOLED panel with a resolution of 2,960 x 1,848 pixels with a refresh rate of 120 Hz. It also integrates an under-screen fingerprint sensor. At the base of the tablet is a Snapdragon 8 Gen 1 processor, the most powerful processor on the Android platform so far, along with 8, 12 or 16 GB RAM with progressive storage options: 128, 256 or 512 GB and 1 TB. Samsung offered us prices only for the basic version, 128 GB, so the others will not be available in Romania. However, all of them allow you to expand the storage space with a microSD slot. There will also be a 5G variant. With a large size comes a custom battery: 11,200 mAh capacity, with fast charging at 45W. It is impressive, however, that such a large battery took place in such a thin body. In terms of accessories, Samsung delivers the Galaxy Tab S8 Ultra with the magnetic S-Pen, which attaches to the back and charges wirelessly, as well as a USB-C cable. The charger is not included, nor is the Galaxy Book Cover, the magnetic keyboard case I mentioned earlier. There is also a keyboardless cover, which can be purchased separately. While we have no prices for accessories, Galaxy Tab S8 Ultra starts at a price of 1,149 euros.

The Galaxy Tab S8 and Tab S8 + are, however, slightly more traditional tablets in design and size. Even if they are cheaper models, they benefit from top hardware, comparable in performance to what we find on Ultra.

Read:  Google is making improvements to Contacts, with faster access to basic features However, the configurations of these models are identical: 8 GB RAM and 128 or 256 GB storage, with the same Ultra camera system on the back (13 + 6 megapixels) and only one front camera: the ultra-wide one. The processor remains Snapdragon 8 Gen 1. There are differences in the battery: 8,000 mAh for the “small” model and 10,090 mAh for the large one. Both can be charged at 45W, so the power supply should be fairly fast. Unlike Ultra, which comes in a single color, Graphite, they also come in Silver and Pink Gold.

Prices for the Galaxy Tab S8 start at 749 euros, while the Tab S8 + starts at 949 euros. As in the case of Ultra, only the basic variants, with 128 GB, come to Romania, but all allow the connection of microSD cards up to 1 TB.

How much does the new Samsung Tab S8 tablet cost