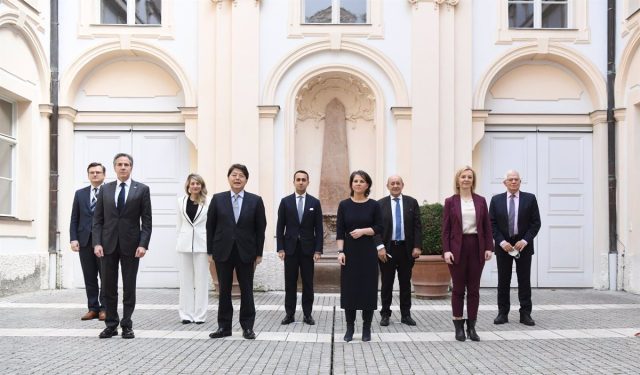 The governments of the G7 and the European Union have called for Russia to be expelled from the UN Human Rights Council in retaliation for “atrocities” perpetrated in Ukraine and have demanded that those responsible be held accountable for possible war crimes and crimes against humanity. committed since the beginning of the invasion.

The foreign ministers of the United States, France, Germany, Canada, Italy, Japan and the United Kingdom, as well as the High Representative for Foreign Policy of the EU, Josep Borrell, have signed a joint statement in which they condemn “in the strongest terms “Massacres such as those recorded in Bucha and other areas near kyiv.

In this sense, they lamented that “the images of dead civilians, victims of torture and apparently executed” show “the true face of the brutal war” launched on Ukraine. They have urged Moscow to comply with the precautionary measures issued by the International Court of Justice (ICJ) and which proposed the immediate suspension of the offensive, which began on February 24 by order of President Vladimir Putin.

The call, which is framed within the “unwavering” support for Ukrainian sovereignty and territorial integrity, also extends to humanitarian aid, so that it can be distributed “safely, quickly and without obstacles” in Ukraine, and to corridors of civilian evacuation.

The signatories have warned against the possible use of chemical, biological or nuclear weapons in this conflict, since “it would be unacceptable and would lead to serious consequences,” according to the statement.

“We have already adopted unprecedented economic and financial sanctions against Russia that pose a significant cost to its economy,” they said. Now, they believe it is time to “increase this pressure”, with an eye toward “reducing dependence on Russian energy.” “We will work together with this objective,” they added.

The meeting between G7 foreign ministers took place in the presence of the head of Ukrainian diplomacy, Dimitro Kuleba, who thanked the support on social networks. Kuleba has confirmed discussions in the military, economic and humanitarian fields with the aim of taking international assistance “to a new level”.

“Ukraine proposes a fair agreement: the world offers us all the support we need and we defeated Putin in Ukraine”, the minister summed up.