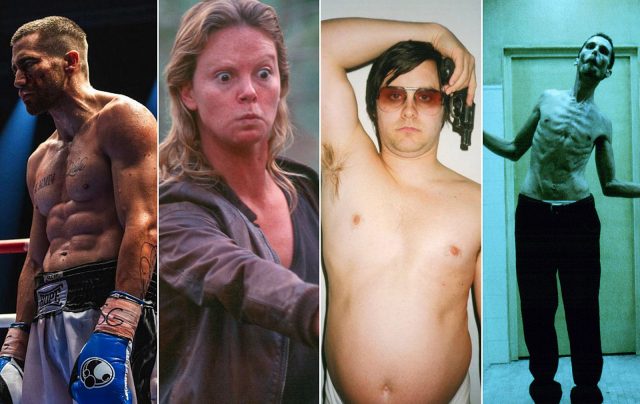 When we think of actors, we almost instinctively get the impression that they lead luxurious, easy lives, and deep down we can’t help but envy them. Yet great Hollywood actors often make extreme sacrifices in order to portray a character.

Weight loss or even weight gain, prosthetics, heavy make-up – all part of an actor’s training when he or she undertakes to bring a “difficult” character to life. Beyond the physical changes, actors devote hundreds of hours to study and emotional preparation, especially if they are adept at method acting.

With that in mind, we thought we’d give you a few examples of actors who have “gone out of their way” to get under the skin of fiction.

When you think of Charlize Theron, the angelic and delicate figure of the actress automatically comes to mind. But if you’ve seen Monster, the film she starred in alongside Christina Ricci, and haven’t read the cast, you might not have realised who portrayed Aileen Wuornos, the famous serial killer.

To convince, Charlize Theron gave up dieting and agreed to have her physique altered by make-up artists. Perhaps even more importantly, Theron has studied Wuornos so well that you can hardly tell her from the real character.

50 Cent lost 24 pounds for one role: from muscle boy to cancer patient

Rapper 50 Cent is known for many things, and his “gym-bound” physique certainly impresses every time. However, the star, real name Curtis Jackson, has been shocking his fans since 2011, when he filmed for All Things Fall Apart, in which he played a footballer diagnosed with cancer.

Read:  The best artists from Romania open the Christmas Fair on November 11 in Craiova [P]

For the role, 50 Cent lost over 24 pounds and did so by surviving on a liquid diet and spending three hours a day on the treadmill for nine weeks. He also had a number of his tattoos removed for the role to “save time by covering them up”.

“I was starving,” the star later said in an interview.

Of all contemporary actors, Jared Leto is perhaps the most versatile. Over the course of his career, he has gained weight, lost weight and worn make-up, making him often extremely difficult to recognise.

One noteworthy example is his recent role in House of Gucci, a film directed by Ridley Scott, in which Leto gave life to Paolo Gucci.

But that, of course, isn’t all.

As you can see in the photo below, the actor impressed in Dallas Buyers Club (middle photo), as well as Chapter 27, where he played John Lennon’s assassin.

As with Jared Leto, Christian Bale also puts a lot of effort into his roles. Thus, the actor lost a lot of weight for The Machinist, only to gain weight for American Hustle and put on muscle for Batman Begins.

However, Bale has admitted that what he does can become dangerous to his health. “I can’t go on like this. If I do it, death will stare me straight in the face,” Christian Bale once declared.

For the 2009 biopic Bronson, in which Tom Hardy transformed himself into notorious prisoner Charles Bronson, the actor had to follow a draconian routine of intense preparation that required coordination and dedication.

“To get dense muscles, you need a certain kind of training,” he told AskMen. “Also, to ‘become’ Charlie Bronson, I had to quickly put a lot of weight on my forearms, chest and neck. By the time I was done, my legs looked like a stork’s compared to the top half of my body,” Tom Hardy also said, in an extremely funny note.

It should, however, be recalled that he has also played a role where he had to “become someone else”. In this case, we’re talking about the character of Shinzon in Star Trek: Nemesis (2002).

Robert De Niro or the definition of absolute talent

Obviously, Robert De Niro needs no further introduction. But he couldn’t be missing from this list, since the great actor has made impressive sacrifices throughout his career.

He played roles both negative and positive, but was particularly notable in the less aesthetically pleasing ones, from Taxi Driver to mobster to boxer.

Dallas Buyers Club, a film of absolute change and for Matthew McConaughey

Like Jared Leto, Matthew McConaughey also went to extreme lengths to carry out his role in Dallas Buyers Club. While he hasn’t lost as much weight as his co-star, you have to look very closely to realize he’s the one playing the role.

In Nightcrawler, Jake Gyllenhaal played a sleazy journalist who ends up taking his job to the extreme in his quest for sensationalism. The decisions the actor made, physically, definitely helped when talking about the believability of the character, per se.