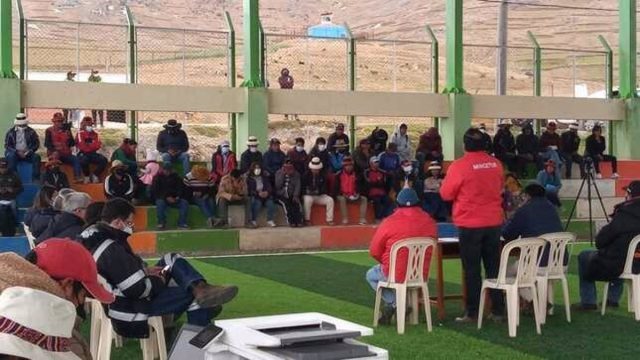 The representatives of the peasant communities protesting against the Peruvian mining company Las Bambas have withdrawn from the negotiating table, chaired by the Minister of Commerce and Tourism, Roberto Sánchez, after denouncing the absence of the Prime Minister, Aníbal Torres, and the President of Peru, Pedro Castillo.

According to the Peruvian RPP, the community leaders have reiterated their request to the Peruvian authorities to lift the state of emergency in the districts of Chalhuahuacho and Coyllurque. “We don’t know when they will give us the answer that they will lift the measure and we are waiting. We can’t talk beforehand,” said the leader of the Chila community, Edgar Lima.

“Before communities and residents, we express the Government’s firm decision to achieve social peace (and) dialogue with the immediate reestablishment of economic and productive activities in Challhuahuacho. We continue in coordination for the next step,” said the Minister of Peruvian Trade and Tourism on its official Twitter profile.

Read:  The US alerted fifteen countries in May about the possibility that Russia was trying to sell grain stolen in Ukraine

The Ministry of Foreign Trade and Tourism has specified in a statement that the Peruvian Executive proposes “the reestablishment of economic and social activities”, as well as the continuation of the dialogue with the six communities of the province of Cotabambas in a period of 15 days.

In addition, it has indicated that, during the meeting, in which no agreement was reached between the parties, the Peruvian authorities made it clear that an essential element to lift the state of emergency is “to restore social peace throughout the mining corridor.” , as well as “the commitment to social peace”.

As reported by the Andina news agency, added to this conflict is the case of the province of Antabamba, where the Ares mining company has denounced that a group of miners have burned its facilities and expelled its personnel.

The paralysis of the Las Bambas mining company, in the department of Apurímac, which represents 2 percent of the world’s copper supply and which has already stopped its activity on other occasions due to protests, implies a strong economic impact for the Peruvian State.

At the end of April, the Peruvian Executive declared a state of emergency in Challhuahuacho and Coyllurqui, in the province of Cotabambas, due to the peasant protests of the communities near the company, who assure that Las Bambas has not complied with a series of commitments since 2014 for its extractive operations.

The company, operated by the Chinese MMG Limited, has paralyzed its copper production due to the protests and blockades of these communities, which interrupt the traffic of trucks in the area to paralyze its production.