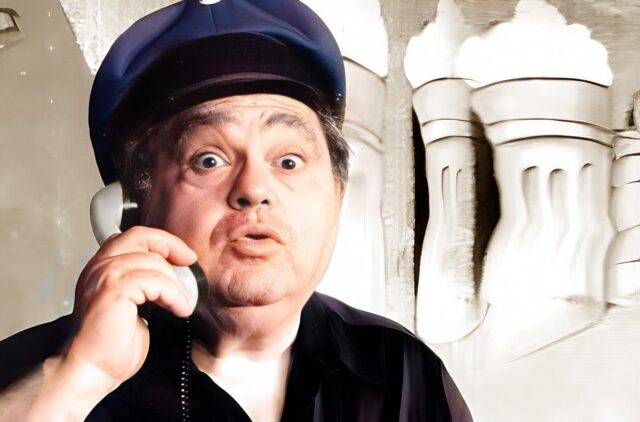 Mircea Crișan was a household name in the 1960s, and Romanians were fighting over tickets to his humorous shows.

The comedian entertained generations of Romanians, in a period of sad memories, when laughter was a real relief for those grey times.

Mircea Crișan, the Romanian humorist unjustly forgotten by the public

Mircea Crișan was born on 8 August 1924, under his real name Mauriciu Kraus. As chance would have it, when he was born, his mother was in a train carriage crossing Maramures.

His parents were employees of an amusement park, and the young man used to accompany them everywhere, and it was they who succeeded in instilling in him a love of showmanship and travelling art.

At the age of 19, Mircea Crișan started working as a mezzanine salesman, and at the same time tried his hand at the Barașeum Theatre as an extra.

“Right from the first appearance I had a great success in the role of the butcher. In the evenings I played at the theatre, during the day I sold sausages: that’s how I lived. All my colleagues said: Ah, that’s why he’s so successful, because he’s a butcher!”, declared Mircea Crișan years later.

Maria Tănase is said to be the one who first discovered his talent. “The Barașeum Theatre was on two floors: upstairs was Potopul, downstairs a revue with Maria Tănase. The director Dinu Negreanu had written my role on a business card. At the beginning of the play I asked for a brandy, at the end of the play, another brandy.

In the meantime… the flood was coming! So I had time to play downstairs at the magazine. Maria Tănase, hearing that I could imitate them all, said: Let Crișan come! And I imitated all the actors playing upstairs. People fainted with laughter! During the war, I did an act imitating bombing. I lived in Bariera Vergului, on a small street. From the tram to home, we rehearsed. We made bomb noises, imitating American planes over Bucharest”.

Mircea Crișan, a cause of concern for Nicolae Ceaușescu

He studied at the Conservatory of Dramatic Art, in the Maria Filotti class, from 1944 to 1946.

In 1946 he made his debut in “Ca la noi la nimeni”, alongside Maria Tănase, Sephi Alșec and Beno Verea.

A year later he got to know Nicolae Ceaușescu, with whom he would have an unusual conversation.

“I was employed for 11 years at the Army Theatre. I went around the villages, in the mountains, with the soldiers, on maneuvers. That was my first meeting with Ceaușescu. In 1947, in Constanța, where the navy maneuvers had ended, at the Hotel Rex, the naval officers were gathered. After the show, on the terrace, they all came to congratulate me. Officers, admirals… An infantry general, whom I didn’t know, also came.

Read:  Bentley is actively working on its electric range: when production starts, how much does it cost?

He comes up to me and says: This is bourgeois-mansionary diversion! You divert the attention of the working class from the problems and make people laugh! On the terrace at Rex’s, I thought I was dreaming! Ceaușescu was then the head of the Superior Political Directorate of the Army, i.e. the chief of the politruchs. Since then, he’s always kept his eyes on me. He was trying to catch me”, the comedian Mircea Crișan also confessed.

In 1968, the opportunity arose for a tour of Paris, at the Olympia Theatre, so he seized the opportunity, stayed in the West and finally settled in Germany, where he began to appear on various stages under the name Mircea Krishan.

In this country, he collaborated with many well-known artists of the time, including Rudi Carell and Gisela Schlüter.

Later, in 1972, he starred in the music hall play Anatevka by Jerry L. Bloch as Tejde. He would play this role until 1998, enjoying enormous success worthy of your talent.