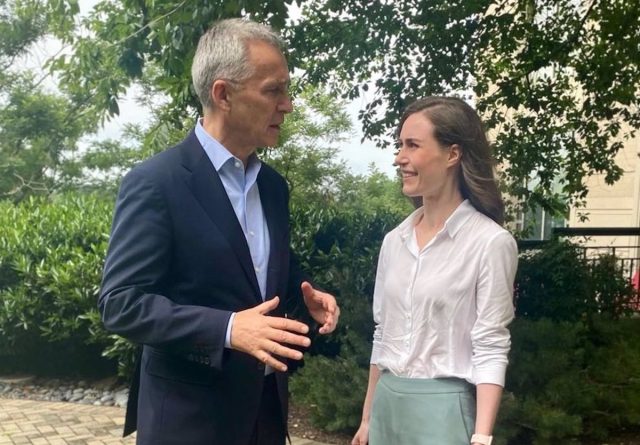 Stoltenberg has highlighted that Finland is a close partner of NATO and has detailed that he has made progress with Marin on the request to join the Alliance of Finland and Sweden.

“It has been great meeting with the prime minister of our close partner Finland in Washington. We have discussed the need to address Turkey’s concerns and move forward with Finland and Sweden’s NATO membership application,” he said in a message released to through his Twitter account.

On the other hand, Stoltenberg has also held a conversation with the president of Turkey, Recep Tayyip Erdogan, whom he has urged to “promote an agreement on food security”, especially given the risk that the situation poses for grain exports.

“We have discussed the accession of Finland and Sweden to NATO and we have agreed that we will continue the dialogue,” the NATO secretary general detailed in another Twitter message.

On Wednesday, Stoltenberg announced that he will bring together top officials from Sweden, Finland and Turkey at the alliance’s headquarters in Brussels to unblock the accession of both Scandinavian countries, which Ankara vetoes citing security concerns over ties to the Workers’ Party. of Kurdistan (PKK).

Read:  Russia reports the arrival of more than 335,000 refugees from Donetsk and Lugansk since the beginning of the invasion

The former Norwegian Prime Minister then confirmed that a meeting “in the next few days” would be convenient to ensure that the military organization “progresses” in the accession of Stockholm and Helsinki, which requires the unanimity of the 30 allies.

Stoltenberg has indicated that he hopes to make progress before the NATO leaders’ summit in Madrid at the end of June but has avoided detailing what the Nordic countries must do to save the Turkish veto.