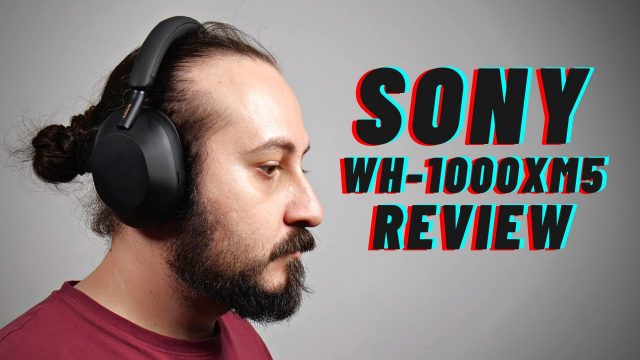 Sony’s WH-1000X series headphones are already “legendary” in the market, despite the unattractive name, offering one of the best combinations of premium construction, quality sound, high comfort and above-average battery life on the market. The fifth generation, the WH-1000XM5, doesn’t at first glance come with much new in the way of capabilities, but rather seems to start a new direction for over-ear wireless headphone design from Sony. In terms of technology though, we’re dealing with a minor upgrade.

WH-1000XM5 design is the biggest change from the previous generation

The biggest new feature of the new WH-1000XM5 pair of headphones is that Sony is adopting a slightly different exterior design. The shape of the cups has been changed, as has the shape of the top bracket, while the headphones no longer fold or crease as much as the Mark 4. This removes a few points where the earphones might crack over time, with fewer moving parts included. At the same time, these elements could be the very reason why some users will still prefer the previous generation. That’s because such headphones are generally great for travel, as noise-cancelling technology can successfully eliminate the sound of airplane engines or the noise of a crowded train or bus. But the lack of folding suggests they will take up more space in luggage, especially if carried in their original case. In addition to this problem, the cups no longer fold in both directions completely, but only in one, which means that when you’re wearing the headphones behind your neck and not actively using them, the cups are always pointing outwards.

Sony has begun in the last few years to adopt eco-friendly packaging for its audio products, with the new WH-1000XM5s shipping in a box made from recycled cardboard, which is just a thin layer of protection for the fabric-covered case that the headphones actually sit in. The packaging is very minimalist, with a quick instruction card, a USB-C cable for charging, and a 3.5mm jack cable for connecting the headphones to sources that don’t offer Bluetooth connectivity in the package. The earphones are made of very high quality materials, from the matte plastic of the outer cup covers, which is very pleasant to the touch but not very fingerprint resistant, to the soft eco-leather with memory foam around the cups and center stand. We’re dealing with a well-built pair of headphones that doesn’t squeak and feels very solid in use, which ensures high comfort in use, especially thanks to the way the weight is balanced.

The left cup is the one that includes the two physical buttons, power and noise cancellation, as well as the headphone jack, while the right cup includes a touch surface for control as well as the USB-C port for charging. So you have quick control and separate functions for each cup, being able to quickly control each function. However, the left cup doesn’t have touch at all, which may seem odd at first, but you can quickly adapt to single-sided control. While the headphones can be connected to mobile devices quickly using Fast Pair on Android or Windows, connecting them to the Headphones Connect mobile app unlocks the full set of features available on the WH-1000XM5. Here you not only have the ability to set an audio profile, or make a custom one, but you can also change the behaviour of the noise cancellation button, enable automatic recognition of ambient conditions, or activate Spotify Tap, for quick start of music playback via the service. Also here, Sony integrates some more special capabilities, especially related to 3D sound playback. Unfortunately, however, spatial sound playback is only available on a few compatible services, which in turn require separate subscriptions. Sony even allows 3D sound to be configured based on the shape of users’ ears, requiring photos to be taken of each individual ear, which are then analysed to create a personalised profile. Unfortunately, limiting these features to just a few services means that not many users will benefit from this extra capability. I, for one, was unable to test this functionality.

The app is well organized and provides quick access to the usual features, but once you’ve got everything set up, there’s not much reason to go back to it. The Sony WH-1000XM5 are some of the most comfortable headphones of their kind on the market, being large enough to cover the ears well without putting undue pressure on them in use. So you can sit for hours with these headphones on your ears without any physical discomfort. And the fact that they offer between 30 and 40 hours of listening on a single charge will ensure that you can wear them pretty much all day without having to charge them. Throughout the testing period I didn’t charge them about once a week, and the first week not at all, having enough battery from the factory for a good few days of listening, even with ANC on. This is especially gratifying for very long flights, where you could keep the headphones on even without playing music, as background noise cancellation is active as soon as you put them on.

In fact, this should be the main reason to choose the WH-1000XM5 headphones over the previous generation or other models. The new model offers some of the best ambient noise cancellation technology around, with more microphones on the outside and an advanced processor that detects and isolates repetitive sounds very well. Even at home or in a quiet office where you can hear the air conditioning, the WH-1000XM5 completely cancels out the sound it produces and can provide added comfort. But I was also pleasantly surprised by the ambient mode, which allows outside sounds to penetrate the headphones. You can use the ambient mode all the time, which is especially useful when you’re out and about, so you can hear potential hazards like cars in traffic, or you can quickly “summon” it in normal use when you want to talk to someone by covering the right cup with your palm. The outside sound picked up by the microphones is clear and very close to the way sound is naturally perceived.

Read:  INFOGRAPHIC: How the range of electric cars has evolved compared to conventional cars in recent years However, most of the time you’ll want to listen to them with both headphones on, as the audio quality they deliver is among the best in its class. We get excellent playback of the entire frequency range, from the lowest to the highest, at pretty much any volume level. Personally, I listened much of the time at or near full volume, as that’s where I could feel the full impact of the speakers. The sound below 80% power level seemed too quiet to me, and the bass impact seemed much more limited.

Despite offering a “flat” sound profile, the Sony WH-1000XM5 headphones are clearly tuned to deliver strong bass even in this mode. There are other profiles that may offer less or more bass, as well as the ability to achieve a custom sound curve, but in general, low frequencies are predominant. This isn’t necessarily a bad thing, but the more discerning audiophile-seeking products probably won’t appreciate it. However, that audience probably isn’t in Sony’s target audience with this model anyway. The WH-1000XM5 is a very good pair of headphones, but it is by no means without its drawbacks. For example, the touchscreen control of playback and volume doesn’t match the quality of other areas. Multiple swipes up or down are required to adjust the volume, as each swipe raises or lowers the volume by one. Buttons with + or – on the outside would have been much more intuitive and useful. At least playback is activated with two taps, so you can avoid accidental presses when fitting the headphones to your head.

As I said at the beginning, the lack of folding and folding will make the WH-1000XM4 headphones easier to recommend to those who travel a lot, because they come with a smaller carrying case and can be easier to transport, and Sony isn’t taking them off offer, but keeping them. The differences between these models come in advanced features, perhaps a little in the quality of the sound rendered (though it’s hard to tell without having both models for comparison) and in ambient noise cancellation, where the XM5 benefits from more microphones and more advanced processing.

Overall, the Sony WH-1000XM5 is a minor performance refresh over the previous generation. Advanced capabilities, such as 3D sound, are aimed at a fairly narrow audience, and the new design might not appeal to everyone. Still, it’s hard to find an equally well-equipped wireless headset that’s more enjoyable to use than this model. The only other comparable options on the market now are the Bose 700, already released a few years ago, and the Apple AirPods Max. However Sony has a few advantages over these: longer battery life than Bose and lower price than AirPods. Even so, the WH-1000MX5 are very expensive headphones. In Romania they are on offer in stores at around 2,000 lei, while the 1000XM4, the previous model costs around 1,500 lei, and the 1000XM3, a bit older but close in capabilities can sometimes be found in stores for under 1,000 lei. Whichever model of Sony’s 1000X headphones you choose, you’re sure to get premium construction and very good audio quality.