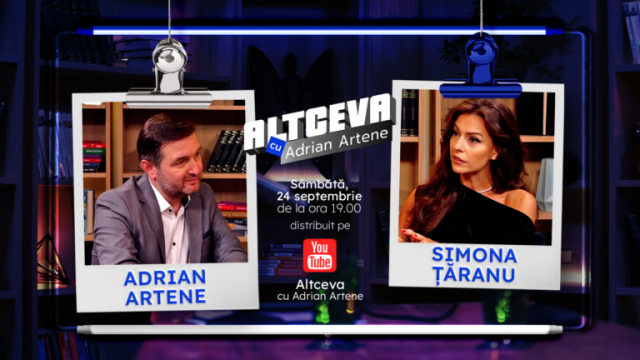 The beloved TV sports news presenter Simona Țăranu is Adrian Artene’s guest on the ALTCEVA podcast that will be broadcast on Saturday, September 24, starting at 7:00 pm.

Simona Țăranu was born on 17 November 1988 in Piatra Neamț and comes from a family of engineers. She graduated from Petru Rareș National High School in Piatra Neamț, then moved to Bucharest, where she studied Cinematography and Television at the Media University.

She worked at Digi 24, where she presented the weekend news, then in 2011 she moved to Digi Sport, being a big fan of the Spanish football team FC Barcelona.

Simona tells ALTCEVA about how television turned her around from her path to the convent, the family connection she has with… Ion Creanga and reveals which sportsman she would give a day of her life to.

Watch the full interview with Simona Țăranu on Saturday 24 September from 7pm only on the YouTube channel Something Else with Adrian Artene.