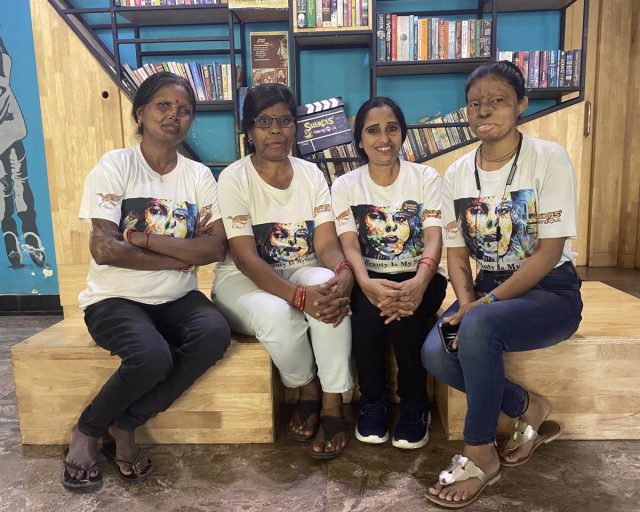 Next to one of the most touristic places in the world, the Taj Mahal, in the city of Agra (India), there is an inclusive project where women survivors of an acid attack fight against social stigma, have a new life together at the forefront of two restaurants and serve the tourists who come to support their initiative.

Their aggressors intended to disfigure their faces to cut short their lives, but they are an example of overcoming and, with a smile, they show daily that the scars do not prevent them from being themselves.

‘Sheroes –play on words between she (her) + heroes– Hangout’ is a project for heroines, as its name indicates. The main purpose is that through social inclusion more than 100 women have a job, a space in which to carry out different activities and share time with other acid attack survivors who have gone through the same thing as them.

Rupa, born in Faridabad, the largest city in the Indian state of Haryana, was attacked by her stepmother one night in 2008 because she did not want her to marry any man.

Sitting in one of the ‘Sheroes’ chairs at the end of her work shift, she remembers at 28 that “all her dreams were erased with acid” and when she found out about this project her life changed radically. She assures that “she is very happy” and her life “is fantastic”, she has been working in one of the project’s cafeterias since its opening in 2014 and, in addition, she says that she is a fashion designer.

For her, this project “is like a family where everyone enjoys together” and she says that, when she has vacations, she misses going to work because for her, ‘Sheroes’ “is life”.

Rupa tells the people who come to learn about the project her story to give voice to the acid attacks and thus prevent other women from being attacked.

“EVERYTHING HAPPENED SO FAST”

Another of the girls who attends the tables is Ritu, who left her hometown, Rohtak, in the state of Haryana (in northern India), in search of a new life in Agra. Her dream was to be a volleyball player at the international level, but one day when she was walking down the street she was approached by two men on bicycles and before she could suspect anything, one of them sprayed her face with acid. .

“It all happened so fast. I don’t think any acid attack survivor wants to meet their assailant. But I would like to face mine one day and ask him: Why did you do this to me?” Ritu says, adding that now, thanks to ‘Sheroes’, he participates in activities that contribute to raising awareness in the Asian country’s society to fight against acid violence.

These attacks are a scourge in India. Between 2014 and 2018, there were 1,483 victims of acid attacks in the country, according to data from the National Crime Records Office of the country’s Ministry of the Interior.

“Before 2014 there was no data on the number of acid attacks in India,” explains Ashish Shukla, co-financier of ‘Sheroes’ and executive director of the NGO Stop Acid Attacks, the organization behind this project.

Shukla stresses that the project was started to show that acid attack survivors can be and achieve whatever they want. “We currently support more than 100 survivors and provide legal, medical and educational help and, of course, empowerment,” Shukla details.

On the other hand, the International Foundation of Acid Survivors (ASTI, for its acronym in English) affirms that the real number of attacks exceeds 1,000 a year and assures that India is the country where more crimes of these characteristics take place in the world. . Also, according to ASTI data, 76 percent of acid attacks in India are committed by a person close to the victim.

THE DESIRE TO MOVE ON

This is the case of Dolly, who was attacked when she was 12 years old by a 25-year-old man, because she refused to marry him. The acid destroyed her nostrils causing a permanent respiratory problem. After the attack she spent more than a year without wanting to leave her house. But working with other survivors at the ‘Sheroes’ meeting place gave her the courage to continue living.

Dolly claims she sent a letter to her assailant saying, “You burned my face, but not my will to live. You can’t throw acid on that.”

And he warned him that he will fight his case in court, “not only for me, but for other girls so that they do not lose courage before people like you,” he wrote in the letter. Currently, Dolly is studying and her aspiration is to be a doctor.

Since the ‘Sheroes’ project began, Shukla says he has seen a “little” change in Indian society. “People talk about this and women come with real stories and they want to learn something, before 2014 they didn’t want to face anything,” she says.

“The next step is to support these women so that they can become entrepreneurs and become part of companies,” Shukla concludes hopefully, before a possible change regarding acid attacks in the future.