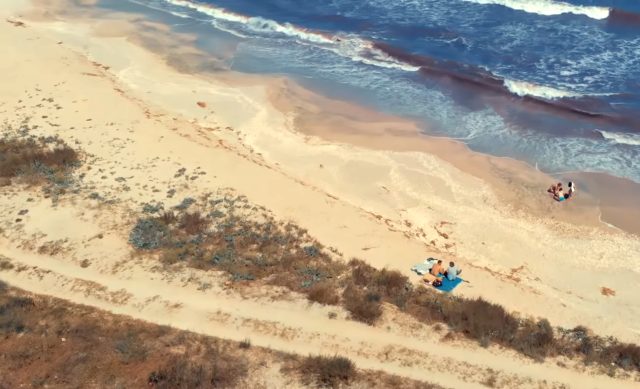 Although the Romanian coast is becoming more and more expensive, many tourists choose to continue going here. Apart from the well-known beaches in Romania, there are also secret beaches away from the crowds and noise, but also beaches for those who prefer to sunbathe in Adam’s or Eve’s costume.

The summer season is waiting for thousands of tourists to reach the most famous beaches in Romania, but not everyone prefers these crowded and noisy places most of the time. If in the past years, there were still quiet resorts, now the noise can be found in any of these resorts. These beaches are also called “secrets” based on the fact that they do not have such a high marketing campaign as Mamaia, Vama Veche or Costinesti, so they are known more by locals than by tourists.

Many tourists and not only, are always looking for lesser known beaches where they can enjoy a quiet and relaxing holiday on the shores of the Black Sea. Thus, some choose to go to the turquoise sea of ​​Tuzla beach. This is highly praised for the clean water but also for the peace they have here.

A similar place is only 5 kilometers away, somewhere between Eforie Sud and Eforie Nord resorts. Away from the overcrowded resorts, these beaches are a haven for holidaymakers. Similar beaches can be found at Corbu, Vadu or Gura Portiței.

The Romanian coast also offers beaches for those who want to give up clothes and inhibitions and sunbathe. Sulina beach is one of them, where nudists prefer to sit on the beach without a bathing suit and where you say it is a quiet beach.

At St. George’s there is another very long and welcoming beach for nudists. A small problem would be its accessibility, but from this point of view, it is an extra privacy for those who want to be 100% “free at sea”.

I mentioned earlier that Gura Portiței is a quiet beach. Besides, find out if you like to practice nudism and this place can be a choice for you as well, as there are very few people here. But be careful to do this after the resort, where nudism is not allowed.

Eforie Nord resort It also offers a portion of the beach for those who want to go nudist. Such a beach can still be found in youth resort, Costinesti. This place is also known as the French Gulf. Although the beach is not large, it is an option for nudists in this resort.

Vama Veche and 2 Mai resorts also no longer have such beaches, especially in the case of the first resort that has become extremely popular in recent years and not being what I once knew, a beach with rock and folk music, fires guitar camp and concerts.

If you are in Vama Veche and you need privacy on the beach, it would be best to go to the edges of the beach or on the piece of sand between May 2 and Customs. These would be the only options you have in these places if you are a fan of nudism.

Read on: The nudist beach that was arranged 70 kilometers from Bucharest. City Hall explanation