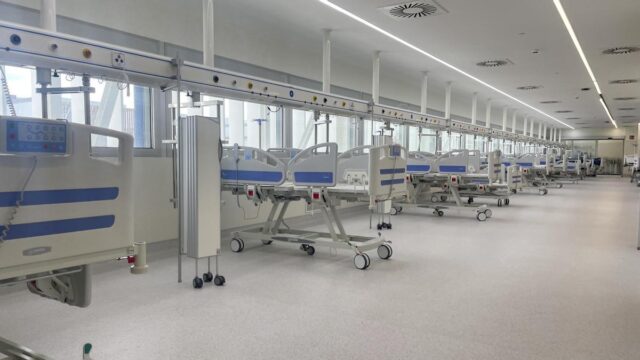 The Conselleria de Salut has admitted that, in the last year, the Moisès Broggi satellite hospital (Sant Joan Despí) did not use any of its 64 critical and semi-critical beds. They were totally empty and unused. Last year, this building (inaugurated on April 20, 2021, which cost 16 million euros and occupies more than 4,600 square meters) was only used as a vaccination point and for CT scans. Thus, it only admitted and treated patients for eight months in 2021. The ‘conselleria’ has come out to say that the building will soon have “ambulatory uses” and that it is “working” for move services from the old building to the new one.

The Moisès Broggi satellite hospital is an annex building built in 2021, at the height of the pandemic, to decongest the Broggi at a time when covid-19 was still raging. “This is strengthening the health system, to respond to covid, but also thinking about postcovid, about what the health system will need”, said the then ‘consellera’ de Salut in April 2021, Alba Vergés, at the inauguration of this satellite hospital. The ucis and semi-ucis beds of this satellite hospital would increase the total number of beds at Broggi to 74: “A spectacular leap,” said Vergés at the time.

However, as EL PERIÓDICO uncovered this Thursday, this building has been empty for more than a year, without patients or staff, without its beds being used, among other things because. there is a lack of nurses. It’s empty while the hospital’s emergency room is overcrowded with patients sleeping in the hallways. “The multipurpose building of the Moisès Broggi Hospital is currently used for the realization of. diagnostic tests (CT) and for vaccination.” Salut sources point out to this newspaper. “In the last year, more than 14,000 people have been vaccinated. In addition, it is a vaccination center that is also open on Saturdays,” they add.

The same sources assure that “it is foreseen” that this building will have. “ambulatory uses” and to house the “Moisès Broggi day hospital”. “Work is currently underway for the transfer of these services from the old building to the new one. and the adequacy project of the spaces will be put out to tender a few weeks from now, they insist.

In addition to the Moisès Broggi, the ‘conselleria’ erected. four more satellite hospitals at Arnau de Vilanova, Bellvitge, Can Ruti (Badalona) and Parc Sanitari Pere i Virgili (dependent on Vall d’Hebron, in Barcelona). None of them has the level of disuse as that of the Broggi, a ghost building in which there is hardly any movement.

Read:  Balcells, in favor of delaying the retirement of primary care physicians and pediatricians proposed by the Health Department

At the worst of the pandemic, the Moisès Broggi satellite hospital was used for. critically ill patients with covid. However, once the severity decreased and all the professionals, until then focused on the virus, began to relocate, the annex of the Broggi began to empty of patients.

“Last year only covid vaccination and some CT scans were done in it. There are no professionals and, above all, no nurses. And, if you don’t have nurses, you can’t have beds in ICUs: they are the ones who are with the patients, who give them medication,” medical sources at Moisès Broggi told this newspaper.

However, Salut assures that “the fact that there are no inpatients does not mean that it has no activity”. “The activity of hospitals is much broader than the hospitalization of patients,” department sources point out.