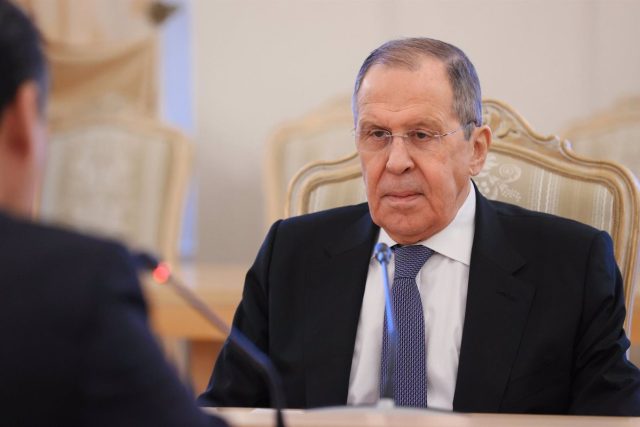 Russian Foreign Minister Sergei Lavrov has reported from Saudi Arabia, where he is on an official visit to participate in the Gulf Cooperation Council (GCC), that “there are risks” of involving third countries in the Ukrainian conflict .

“I will say frankly that in the EU, especially in its northern part, there are politicians who are willing to go to this madness to satisfy their ambitions, but serious countries are of course well aware of the unacceptability of such scenarios,” he explained. , according to the TASS news agency.

These statements come within the framework of the announcement by US President Joe Biden to send multiple launch rocket systems (MLRS) to Ukraine. In this way, Washington plans to send “arms and ammunition” to “be in the strongest possible position” in the face of the negotiations.

“We will provide the Ukrainians with more advanced rocket systems and ammunition that will allow them to more accurately hit key targets on the battlefield in Ukraine,” Biden stressed on Wednesday.

On the other hand, President Vladimir Putin and his Turkish counterpart, Recep Tayyip Erdogan, will collaborate to clean Ukrainian ports of mines, as reported from Riyadh by the head of the Russian Foreign Ministry.

Read:  Khamenei grants pardon or reduced sentences to more than 1,800 prisoners in Iran

“After the conversation between Putin and Erdogan, an agreement was reached that the Turkish colleagues would try to help organize the demining of the Ukrainian ports to free the ships taken as hostages,” said the Russian minister, as collected by the said news agency.

“THERE IS NO SMOKE WITHOUT FIRE”

“This is probably mainly a play on words, but there is no smoke without fire. There really is such a strong Russophobic wing in the European Union, which for many years, in fact, imposed its position on everyone else, speculating on the principle of solidarity and consensus,” Lavrov replied, as TASS has collected.

At the end of May, Borrell asked the EU countries to act in accordance when drawing up their defense spending plans with a view to the creation of “modern and interoperable European armed forces”.

Read:  Ukraine puts the number of Russian servicemen killed since the beginning of the invasion at more than 50,000

With regard to the sanctions applied by the European allies,
Lavrov has indicated that Europe has already “begun to realize the consequences of its sanctions in the field of energy resources.”

The leaders of the European Union managed to maintain their unity by unblocking the sixth package of sanctions against Russia, which establishes an embargo on Russian oil with the exception of the pipeline that supplies Hungary.

The agreement reached late this Monday at the extraordinary summit of heads of state and government will put an end to imports of this fuel by sea from Russia, which in practice means vetoing at least two thirds of all oil arriving in the EU.