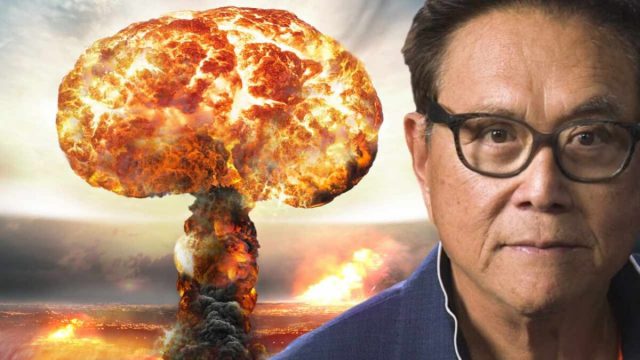 Robert Kiyosaki, author of the personal finance book “Rich Dad Poor Dad“, identified factors that could lead to an economic collapse in the future. In particular, with soaring inflation and rising interest rates, Robert Kiyosaki has in the past issued a gloomy outlook, warning that a historic crash is on the way, as he claims the economy is in “the biggest bubble in world history“.

On his latest episode of the Rich Dad Radio Show, released on December 7, Robert Kiyosaki, alongside his guest, American author and attorney Jim Rickards, addressed three major factors that could sink the economy if not handled properly.

The break in the supply chain

At the top of the list is the supply chain breakdown, which Kiyosaki found was “reaching its peak.” According to Jim Rickards, the supply chain is the foundation of the economy that cannot be run because of its high level of complexity.

Read:  Over 25 million APE tokens will be released to contributors at launch, the token will plunge sharply?

At the same time, Robert Kiyosaki and Jim Rickards pointed out that the supply chain is related to the monetary economy, which is being affected by runaway inflation.

In addition, both authors felt that the economic situation could worsen if the current inflation turns into a depression and contributes to a possible liquidity crisis. Indeed Robert Kiyosaki warned that rising inflation could wipe out about 50 percent of the U.S. population.

With this in mind, Robert Kiyosaki advocated the accumulation of precious metals such as gold and silver, noting that they are likely to survive the crash. In addition, Robert Kiyosaki remains optimistic about the prospects of crypto-currencies, including bitcoin.

Read:  Konami launches Metaverse with a wave of hiring focused on the Web3

Finally, both men identified political instability as a major threat to the economy that could disrupt the supply chain. In this case, Jim Rickards pointed to the tug-of-war between the United States and China for control of the global economy as a factor that will define the future.

He noted that there is mutual pressure from the U.S. and China to decouple from each other, something that could lead to resilience.

“Who will be his partners? Well, they will get natural resources in Africa and relocate their production to South Asia. So life will go on, but it will be much less efficient but more resilient, and that’s the trade-off“Jim Rickards added.

Overall, Robert Kiyosaki maintained that the signs of an economic collapse are already visiblenoting that the stock market, counterfeit money and bonds are toast.