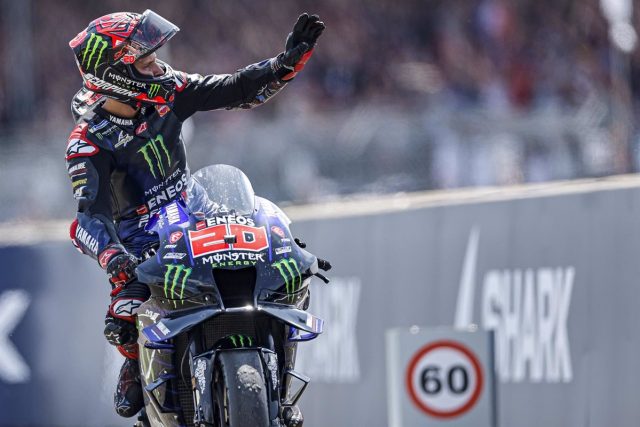 The French rider Fabio Quartararo (Yamaha) achieved victory this Sunday in the MotoGP race of the Catalan Grand Prix, the ninth round of the Motorcycle World Championship, and has strengthened his leadership due to the mistake of the Spaniard Aleix Espargaró (Aprilia), who left to shoot with one lap to go when he was running second thinking that the race was over.

In the absence of a turn, while crossing the finish line in second position, the man from Granollers was already greeting the public present at the Circuit de Barcelona-Catalunya when he realized that the event still had one lap to go. He threw again, but could only correct the mistake by finishing fifth before leaving to cry inconsolably to the box.

The great beneficiaries were Jorge Martín (Ducati), against whom Aleix had already consolidated his second place, the Frenchman Johann Zarco (Ducati), who found himself with an unexpected podium in Montmeló, and, above all, Quartararo, who celebrates his third victory in Barcelona.

Read:  Lewandowski: "Something has died in me, I just want to leave Bayern"

With the nine points awarded by Aleix, ‘El Diablo’ is more leader of the premier class championship, accumulating 147 units, 22 ahead of the Catalan. In addition, the third and until now fourth overall, Enea Bastianini (Ducati) and ‘Pecco’ Bagnaia (Ducati) could not finish the race due to crashes. A true blow of effect of the French champion.

The oldest of the Espargaró could not defend his privileged position in a start in which he was overtaken by the Nice one, whom no one could unseat from the lead. The one from Granollers saw how the Frenchman escaped as the laps passed, while Jorge Martín (Ducati) approached him.

In fact, the one from San Sebastián de los Reyes overtook him already on the third lap, but before that many things had already happened in Montmeló. As soon as he left, the Japanese Takaaki Nakagami (Honda) went to the ground and took on Àlex Rins (Suzuki) again, as happened in Mugello, and with the helmet he also shot the winner of the Italian event, ‘Pecco’ Bagnaia (Ducati). “Nakagami, you are the best”, a very angry Rins already shouted in the box.

Also Marco Bezzecchi (Ducati), Stefan Bradl (Honda), Enea Bastianini (Ducati), third overall, and Fabio Di Giannantonio (Ducati), suffered crashes in the initial section of the test that left them without options, all while Quartararo He was still oblivious to the fight behind for second place.

Aleix overtook Martín on the eleventh lap, but he returned the pass on lap 17. However, the Catalan tried again and overtook him again with three laps to go, although everything was spoiled by his final mistake.