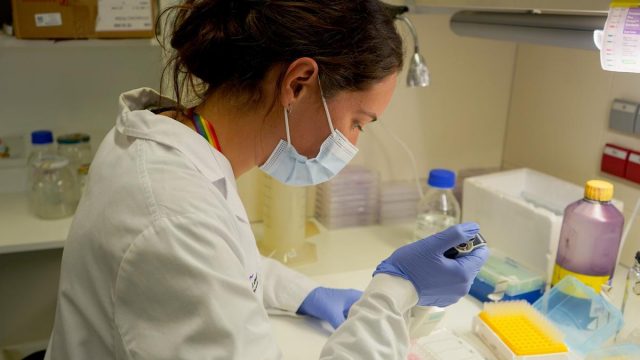 A study led by the Vall d’Hebron Institut de Recerca (VHIR). and the biotechnological company BCN Peptides demonstrate the efficacy of a drug for decrease metastasis in childhood cancer (specifically neuroblastoma and rhabdiomyosarcoma). y breast. For the time being, it has only been tested in preclinical phase (only in mice). but this drug, the RA08 synthetic peptide, is promising because of its results and because there are currently very few peptides available to combat the metastasis, the leading cause of death from cancer.

The research, published in the journal ‘Cellular and Molecular Life Sciences’, has counted with the collaboration of the Pediatric Oncology and Hematology, Pediatric Surgery and Anatomic Pathology services of the Vall d’Hebron Hospital (Barcelona) and the Institute of Biomedicine of Seville (Ibis).

In previous studies by the group, it has been described that the presence of elevated levels of the integrin alpha9 target protein (ITGA9) is associated with a high risk of metastasis. In this work, the researchers have analyzed the biological mechanisms by which ITGA9 favors the cells of some types of tumors to leave the primary tumor and travel through the body to form a metastasis in another organ. Specifically, the role of ITGA9 in tumor invasion has been investigated in cells and mouse models of neuroblastoma and rhabdiomyosarcoma, two of the most common childhood tumors.

Read:  Leukopenia, the side effect of acetaminophen

Researchers have identified that ITGA9 plays a. key role in metastasis of these types of childhood cancer. In addition, it plays a relevant role in the survival, proliferation, migration and invasion. of cells, all of which are key factors for metastasis. Understanding these functions is important for the development of new therapeutic functions.

“One of the values of this study is proof the. antimetastatic effect of a new drug that has shown outstanding results in animal models and that can have a high impact on the prevention of metastasis,” says Josep Roma, principal investigator of the Children’s Cancer and Hematologic Diseases group at VHIR.

Read:  Doctors warn of fatal mix of poly-drug use and mental fragility

In addition, in the framework of this collaborative work, the company. BCN Peptides has designed and is developing a new peptide drug, named RA08, aimed at interfering with the binding between ITGA9 and ADAM proteins (to which ITGA9 binds) in order to block invasion of metastatic cells to other organs. Thus, based on the key role of ITGA) in the occurrence of metastases, the company has evaluated the effect of inhibiting this protein using the RA08 peptide.

According to the results obtained in this study (showing “significant” reduction of metastasis formation in mice), inhibition of ITGA9 could be a “promising” therapeutic strategy in different types of tumors.