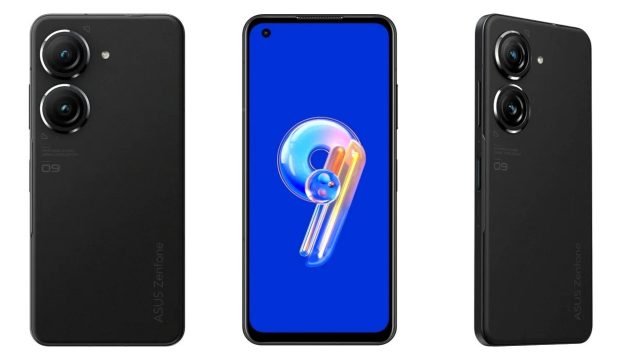 After unveiling its ROG Phone 6 series of gaming smartphones, ASUS has launched the Zenfone 9, its new phone targeting the general public. The company didn’t announce a Flip model with a rotating camera array along with it. I’m sorry to see these models disappear; they were some of the most innovative on the market.

ASUS has packed a lot of powerful components into the compact Zenfone 9 smartphone. However, constrained by the device’s small size, the company also had to make some compromises. Missing from the Zenfone 9 are support for wireless charging technology and a micro-SD card slot. If it had these features, the Zenfone 9 was, for me, the ideal Android phone in 2022.

Instead, the device comes with the most powerful chipset available in the Android “world”, the Snapdragon 8+ Gen 1 (it’s surprising that the Taiwanese chose the 8+ version of the processor, not the regular one), can be ordered with up to 16 GB of RAM, has very good cameras and excellent battery life. Such a combination is rare on compact phones with a screen smaller than 6″.

After several years of using smartphones with very large screens, the Zenfone 9 felt awkward to me for the first few hours of use. But I quickly got used to a smartphone that can be easily operated with one hand, weighs just 165 grams, and doesn’t have to be taken out of your jeans pocket when climbing the stairs on the subway.

A high-performance display, only good for gaming

The Zenfone 9 comes with an AMOLED display, made by Samsung, with a diagonal of 5.92″ and a resolution of 1,080 x 2,400 pixels. The colours displayed are vivid and vibrant, the contrast is high, it has a response time of 1 ms, and the refresh rate can be set to a maximum of 120 Hz. This important component of the phone is protected with Gorilla Glass Victus, the strongest glass available on the market.

Zenfone 9 has always on display, but this is not a full version. Information can be displayed for up to 10 seconds at the touch of the screen. ASUS probably decided to implement the feature in this way to provide longer battery life. I would have liked, however, to be able to permanently display the time and battery percentage on the closed screen.

Also missing is the feature, which I greatly appreciate, double tap to wake, whereby the screen turns on at a quick double tap.

It’s a little annoying that the bottom edge of the display is significantly thicker than the top. Here it’s clear that ASUS has economized on components. The Nothing Phone 1 has narrow edges everywhere, even though it costs around 500 euros.

The device looks, from the front and side, like Apple’s latest smartphones. The edges are flat and the frame is metal. The Zenfone 9’s two physical buttons, volume and power, are positioned on the right side. The Power button hides a few “secrets”: it includes the fingerprint sensor, and swiping on it can display notifications. What’s more, it offers a pleasant haptic response to the touch.

The response is pleasant because ASUS used a linear vibration system on this model, not a rotary motor. In a Linear Resonant Actuator (LRA) the vibrations are smoother and more precise because they are produced by oscillating components.

I’ve always appreciated the fingerprint sensors that are included in the Power buttons. They are precise and faster compared to the ones in the display.

The back of the tested model, the black one, is made of Gorilla Glass 3 and is covered with a matte coating that is pleasant to the touch and provides good grip. The Zenfone 9 comes with a 3.5mm universal audio jack positioned on the top edge, as well as stereo speakers.

The smartphone is dust and water resistant, being IP68 certified.

Also read > Zenfone 9: Accessories announced by ASUS along with the smartphone

ASUS ships the phone with a discreet, hard plastic case. This is thin and has the same texture as the back of the phone. Unfortunately the surface scratches easily. In the seven days I tested the device, a few scratches appeared on the back of the case, although I took care to protect the device.

The box the phone comes in is also interesting, as it is made from 100% recycled paper. The company decided not to make it shiny, but matte, precisely to reduce the carbon footprint in the manufacturing process. ASUS includes the charger in the box, but not the earphones.

Thanks to powerful components and a near stock Android operating system, the Zenfone 9 is extremely fast, especially in the 16GB RAM configuration. It’s a gaming smartphone disguised as a phone for the masses. You can play any title with graphics on the Ultra setting with no problems, and the smartphone doesn’t heat up heavily. That’s because ASUS has included a cooling system on the Zenfone 9 similar to the one on the ROG Phone 6 series. The system features a vapor chamber, and a graphite sheet radiator keeps the temperature down.

I found it difficult, however, after several years of playing on large phones, to adjust to the 5.92″ screen. In World of Tanks Blitz, which has a lot of elements in the “combat” interface, I found them cluttered on the display. I was not able, with this phone, to be as efficient in games as I am when running them with my ASUS Zenfone 8 Flip smartphone with the 6.67″ display. Perhaps in time I would have been able to reach the same level with a compact phone. I don’t know.

Also for gamers, the ASUS Zenfone includes the same Game Genie app from the ROG Phone 6 series. This is much richer in functionality than the one on the Zenfone 8 series models. In short, the app allows the user to turn off features like notifications or calls when gaming. Also in Game Genie, information such as temperature, battery level, frames per second or network latency is displayed. The app can be brought to the foreground by swiping from one of the top corners of the display. In Game Genie there are also shortcuts for recording on-screen content, locking brightness at a certain level or allocating extra resources for gaming.

The ZenUI interface is clean, as ASUS has accustomed us to in recent years. There are no apps that duplicate Google’s. The company only includes a Gallery app for those who don’t do well with Photos in everyday use, and a more advanced file manager than Google’s Android inclusion. I also had an unpleasant surprise. The Facebook and Netflix apps came pre-installed on the phone. Fortunately these can be removed completely, not just disabled like on other phones.

Another strength of the Zenfone 9 is sound, a chapter that is almost never neglected by ASUS on its products. The device has been calibrated in partnership with Swedish specialists Dirac and includes two Qualcomm Aqstic amplifiers, which provide plenty of power for the two speakers. The top speaker uses three magnets and the bottom one uses seven.

What’s more, the phone offers access to a full equalizer in the AudioWizard app and is Hi-Res Audio (HRA) certified.

Zenfone 9 takes quality photos. Colours are faithfully rendered, the sensors capture plenty of light, and scenes with moving elements are captured very well, thanks to the advanced stabilisation system. This, along with Sony’s algorithms and sensors, ensures great results in all conditions, be it sunny day, night or dusk. You can see a number of images captured with the smartphone in the photo gallery attached to the article.

The two sensors on the back can function as macro and telephoto sensors, to a point. It’s not like you have dedicated ones, but they do a decent job in these scenarios.

The front sensor, for selfies, is 12 MP (Sony IMX663) and comes with autofocus, a bit of a rarity. This is a great camera for selfies and video conferencing.

As a conclusion to this chapter, the Zenfone 9 is not, I think, a top 10 DxOMark phone, but it takes very good photos that will please the vast majority of users.

ASUS has managed to include a 4,300 mAh battery in the Zenfone 9. It charges at 30W and features reverse charging support. That means the smartphone can be used as an external battery for other devices. Missing, as mentioned above, is the wireless charging technology, something quite rare on current high-end devices. I think I would have preferred the Zenfone 9 to be a little thicker and heavier, but include this functionality.

This is the first phone I’ve used in a long time that gave me a day and a half of battery life. I’m an advanced user: I have three email accounts in my phone, listen to music and podcasts every day for at least two hours, do a lot of browsing, and occasionally play games. My smartphone, the Zenfone 8 Flip, never offers more than 12 hours of battery life in this scenario, even though it has a 5,000 mAh battery and 90 Hz screen.

ASUS engineers have made great strides in the battery life department. The ROG Phone 6 Pro also offers excellent battery life. It also helps that compromises have been made: missing double tap wake technologies and always-on display.

The Zenfone 9 doesn’t allow for detailed interface customization either. The inability to change the shape of the icons comes to mind. However, ASUS offers useful features in its launcher: users can edit app names or secure apps with a PIN or fingerprint via AppLock.

An easy phone to recommend

The Zenfone 9 is my favorite Android phone of the ones released this year. It has top-notch tech features that offer incredible performance, clean OS, great cameras and amazing battery life. I’m bothered by the lack of wireless charging and would have appreciated a micro-SD card slot, but even in their absence the “package” offered by ASUS is very solid. I would always recommend this phone to people who want a mini-flagship.

In my opinion, the Zenfone 9 is probably the best compact Android phone released so far in 2022.

In the UK, phones are available for pre-order from 28 July 2022 in several configurations and colours. The products will ship in mid-August. For certain configurations and color variants, ASUS is offering a RhinoShield kit as a gift from July 28 to August 21, which includes protective screen glass and a case.