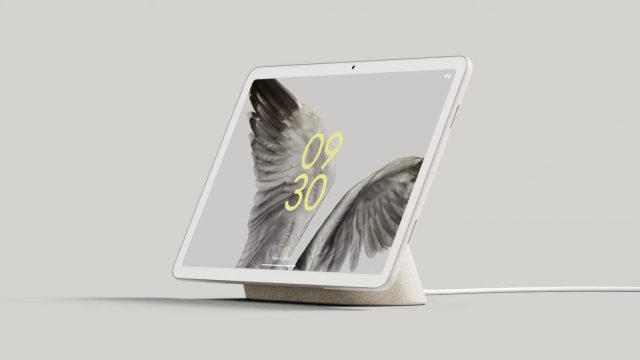 In addition to the new Pixel 7 and Pixel Watch, Google also talked more extensively about the Pixel Tablet, a product that won’t hit the market until next year. It was originally revealed at Google I/O in the summer, so the design was already known. But we didn’t know details about its internal hardware, at least not from official sources. It looks like the Pixel Tablet will be a sort of 2-in-1 device, serving as both a portable tablet for multimedia consumption and productivity, but also a smart home device, Nest Home Hub-style.

Google has provided new details about the Pixel Tablet

Despite rumours suggesting that the new Pixel Tablet will use the older Google Tensor chip that debuted with the Pixel 6 series of phones, Google has confirmed that it will integrate its improved Tensor G2 chip from the Pixel 7. Thus, concerns about the tablet’s performance should diminish. It will offer the Pixel experience on a big screen, with all the benefits of the new flagships in the smartphone space. The tablet will feature a magnetic charging dock, which also offers wireless charging. It will turn the tablet into a smart home display, allowing control of devices in the home, video viewing and quick access to Google’s virtual assistant. Of course, this dock also doubles as a speaker, and is similar in design to the existing Nest Home Hubs. The tablet will also be able to be equipped with a stylus for productivity, but it’s unclear if this will be included in the package.

Given that the launch is still scheduled for 2023, this presentation wasn’t one that went into too much detail. Still, it’s refreshing for Android fans to know that Google isn’t giving up on tablets just yet, even though it’s been many years since the last Nexus tablet and the Chrome OS-powered Pixel Slate, which led to the tablet division shutting down for a few years.