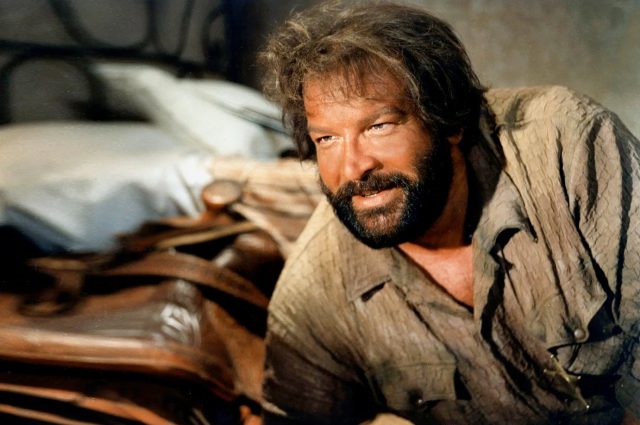 Actor Bud Spencer entertained generations of moviegoers, and the role that defined him was that of Commissioner Piedone in the almost eponymous series of films named after his character.

Piedone in Egypt, Piedone the African, Commissioner Piedone in Hong Kong or Piedone – Commissioner without a Gun: these are just some of the titles that gave meaning to the childhood or even the youth of some Romanians.

At the time, the famous series was particularly appreciated in Romania, so it is easy to understand why, at his death, Bud Spencer was sorely missed. Basically, along with Romanian films and a few other foreign productions, Piedone was, at the time, one of the few ways to spend leisure time in front of the TV in an enjoyable way.

Romanian Television was the first in our country to broadcast the Piedone series. Basically, if you liked crime movies, you were where you should be. If, on the other hand, you preferred comedies, again, you were in the right place. These films were the perfect combination of the two genres, obviously for the times.

The Italian actor died at the age of 86 in 2016, for which the internet went into mourning at the time. Understandable, incidentally, given the above.

Read:  ID.Buzz near launch: how much does the new Volkswagen cost

The one who made Bud Spencer’s disappearance public was his son himself, and he confessed that, before he died, “Piedone” had said one word to him: “thank you”, adding that his father died of natural causes and that he did not suffer.

Immediately after his death, his best friend, actor Terence Hill, sent an emotional message, saying, among other things, that it was a joy to be around Bud Spencer whenever this happened.

“Bud was a joy and I already know that when we meet the next time, his first words will be ‘you and I have never quarreled’.

Every time we met or when I went to his house for spaghetti, Bud would remind me that we never fought.

The reason is that we respected and loved each other and always had a good time together,” Hill said at his friend’s funeral, as quoted by ansa.it.

As you probably know all too well, Bud Spencer is not the only Piedone on this planet. We also have a local one who, when asked why he took the name, said that at one time he would have resembled the beloved actor.

Read:  Disney catches up with Netflix: how the streaming platform has grown

So much did Cristian Popescu Piedone like this nickname that he chose to make it his official name. In addition, his son, the PPU-sl MP (who entered Parliament under the PSD’s baton), Vlad Popescu, also joined the Piedone “clan”, legalising his name in honour of his father, not necessarily the actor Bud Spencer.

Cristian Popescu Piedone served as mayor of Sector 4 in the capital, but had to step down following charges brought against him in the wake of the Colectiv tragedy.

In 2020, Piedone of Romania would try his luck again, this time for Mayor of Sector 5, running on behalf of the same party to which his son belongs. He won the election and remained in office until May of this year, following the final sentence in the Colectiv case, in which he received 4 years in prison.

In case you want to revisit the original character to see whether or not there is any similarity between the Piedone character and the former mayor of the 4th and 5th districts, we invite you to revisit the spot of one of the most beloved movies of all time, below.