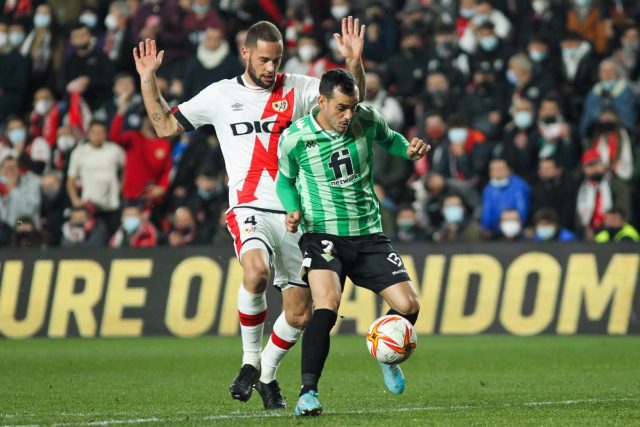 Penultimate step for Betis against Rayo forced to risk

Betis hosts Rayo Vallecano this Thursday (9:00 p.m.) in the second leg of the Copa del Rey semifinal, a duel that will mean the penultimate step for the Verdiblancos, who will finally have Canales and Fekir and who could reach their fifth final of the tournament , while the Madrid team is forced to take risks to overcome the tie (1-2) and play a Cup final for the first time in its history.

Manuel Pellegrini’s team is the favorite to win a place in the final, even more so after the 1-2 achieved in Vallecas thanks to two great goals from Borja Iglesias, with a dry shot after a good individual play, and William Carvalho , who surprised the entire stadium with his cold blood to tunnel into the last defender and define with class against Dimitrievski.

A magnificent performance to which Betis has become accustomed to its parish this season. The Verdiblancos, led by engineer Pellegrini, have built a very stable base based on a very clear football identity, with which it seems that the Chilean will go to the end, and a rotation policy that has managed to have the majority of the squad ‘plugged in’ and in optimal shape for this final stretch of the season.

These good feelings were curbed on the last day of LaLiga Santander, when they lost the derby against Sevilla (2-1), a defeat that did not keep them in third place in the table with 46 points. Thus, the club sees this setback as a simple pothole, despite the fact that it was painful because it was the closest rival, but it should not raise doubts in a squad that, so far, is the only one in Spain that is still alive in three competitions.

Betis has only lost two games of the last 13 they have played, two defeats against two Champions League teams -Villarreal (0-2) and Sevilla (2-1)-, with a balance of 29 points out of a possible 39, for weeks with matches every 3-4 days. A great dynamic that will bring motivation to a green and white squad, who know that this Thursday they will fight for the Cup and the Super Cup, to which the finalists of the KO tournament automatically access.

Read:  Pol Espargaró: "If you're not at the top with a team like Repsol Honda, you're letting yourself down"

This could generate extra motivation that could become a negative point for the Betis, so Pellegrini will be in charge of controlling that excess of desire and illusion that would be an obstacle to reaching the goal. A key duel for the future of the Betis, who are only halfway through their ‘fantastic week’, since next Sunday (9:00 pm) they will also receive Atlético with the Champions League places at stake.

The best news for the Chilean is that he recovers at least two key pieces in his scheme. Sergio Canales and Nabil Fekir, who ended up playing the derby and absent in the last two training sessions, have returned to exercise with the group and aim to be starters this Thursday so as not to miss the most important game for Betis in recent years, since they don’t He has played a Cup final since 2005. Bellerin, with muscular edema, continues to recover and could enter the list even if he is not 100%.

Thus, and after confirming the ownership of Bravo in goal, Pellegrini, who could include some rotation, would opt for Sabaly, Bartra, Edgar and Alex Moreno in defense, with Carvalho and Guardado in the double pivot; Juanmi, Canales and Fekir ahead and, as ‘9’, Borja Iglesias.

For its part, Rayo Vallecano has a unique opportunity in Thursday’s game to play in what would be the first Copa del Rey final in the club’s history. Thus, the redheads want to write a new chapter in gold letters to culminate a season that, thanks to the first part of the campaign, is being unforgettable.

Despite the adverse result of the first leg (1-2) in Vallecas, Iraola, at a press conference, insisted that if necessary they will risk to achieve the great goal, in a match in which motivation will not have to be forced, because, as the coach has asserted, “all the players believe” in the comeback. To do this, they are aware that they will have to take advantage of all the options and thus be able to surprise.

Read:  Aleix Espargaró seeks to be the leader of the house in conflict with the renewed Quartararo

In addition, a victory at the Benito Villamarín would allow Rayo to forget the bad dynamics in which they are immersed, with five consecutive defeats, four of them in the League, where they rank twelfth with 31 points, off the hook of Europe and in no man’s land. A single point out of 21 possible is the poor balance of the Vallecanos, who the last time they chained a losing streak of these dimensions ended up being relegated to Second, in the 2018-19 season.

With the doubt of Merquelanz, who already trains with the group, but has been inactive for months, the only confirmed casualty in Rayo is that of Colombian Radamel Falcao, who will miss the appointment with history due to a muscle injury in the calf. Óscar Valentín has also completed more than one training session with the team and aims to be a starter to accompany Comesaña in midfield. Palazón, Trejo and Álvaro García could also be starters at Villamarín.

It will be the fourth direct confrontation between the two teams this season, of which Rayo has not won any, in a balance of one draw and two wins for the Betis, who in addition to the scoreboard have the statistics in their favor.