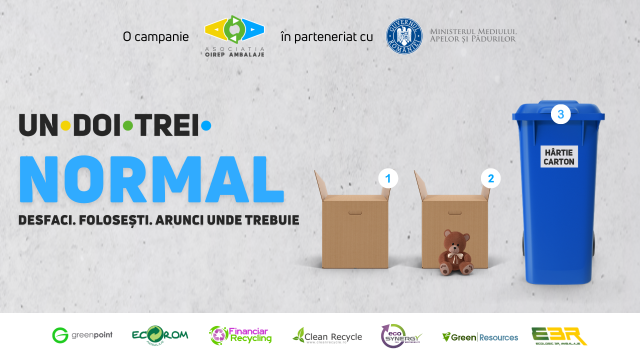 OIREP Ambalaje Association – through Clean Recycle, Ecologic 3R Ambalaje, Eco-Rom Ambalaje, Eco Synergy, Financiar Recycling, GreenPoint Management and Green Resources Management – launches One two Three – the national information and education campaign on the separate collection of packaging waste for the population, which will take place between May and July 2022. The campaign is organized in partnership with the Ministry of Environment, Waters and Forests.

“Waste management continues to be a major challenge for Romania. The country still has a low recycling rate of municipal waste (14%) and high rates of waste disposal (70%). In addition, recycling rates have stagnated since 2013, while the incineration rate has risen slightly to 4%. In 2017, the amount of municipal waste generated per capita in Romania continues to be well below the EU average of approximately 487 kg. ” – stipulates The European Commission’s 2020 country report on Romania. “Today we are launching a bottom-up campaign, ie initiated by OIREP, those who are directly involved in the separate collection process and meant to inform and educate the population. This is the first campaign of its kind and we are glad that the Ministry of Environment is a partner in a joint effort to change mindsets. The challenge of separate collection starts at home for each of us, for any citizen of Romania and the effort is minimal, as evidenced by the “One ‘Two Three” campaign. The Ministry will support any such campaign and together with our campaign, “Clean Romania”, I hope to reach as many people as possible. It is important to reach our young people and children in schools, and through the recently opened green dialogue, more than 5,000 children have already been exposed to the “Clean Romania” messages. Let’s collect separately, it’s simple, common sense, normal, civilized “ – Barna TÁNCZOS, Minister for the Environment, Water and Forests Waste Management Framework Directive requires Member States to meet certain waste recycling targets as follows: 50% by 2020, 55% by 2025, 60% by 2030 and 65% by 2035. Romania has already missed the 50% target by 2020. Packaging and Packaging Waste Management Directive requires that, by 2022, 60% of the packaging placed on the market be recovered or recycled. From 2023, the overall target increases to 65%, and from 2025 to 70%. This means that more than 1 million tonnes of packaging waste must end up in recycling facilities every year.

The main reasons why recycling is still a challenge in our country are: insufficient implementation of separate waste collection processes, lack of a clear infrastructure to support separate collection for citizens and lack of national information and education campaigns for the population.

Separate collection at source, in each household, is the first step in the recycling process, which significantly contributes to reducing pollution, saving energy, conserving natural resources and increasing the quality of life and air, including cheaper products and packaging.

Read:  Asahi is the first Linux distribution that can be installed on Mac computers with M1 processors “The campaign we are launching today is a natural continuation of the efforts of producers and our members, respectively, to increase the level of awareness of Romanians on packaging waste and the absolute need to collect separately. Good packaging waste management starts in people’s homes, and their correct sorting behavior will bring concrete results without delay, contributing to a cleaner and healthier community, but also to the transition to a circular economy. We are pleased to have the Ministry of Environment as a partner, we are convinced that through an exemplary involvement of the authorities and investing in educating citizens, Romania can change for the better in terms of increasing recycling and combating environmental problems. ” – says Mihaela Frăsineanu, environmental expert, Executive Director of OIREP Ambalaje Association.

It takes time to change behavior, but especially education. Repeat steps until they are mechanically or reflexively done.

campaign One two Three is based on a simple idea: Undo. You use. Throw where & how. Collecting separately is SIMPLE common sense NORMAL | CIVILIZED.

The campaign takes place between May and July 2022, at national level, the aim being to inform and educate citizens in order to implement the separate collection of packaging waste at source.

One two Three is a campaign initiated by the OIREP Ambalaje Association, in partnership with the Ministry of Environment, Waters and Forests, created and implemented by the PB&J communication agency.