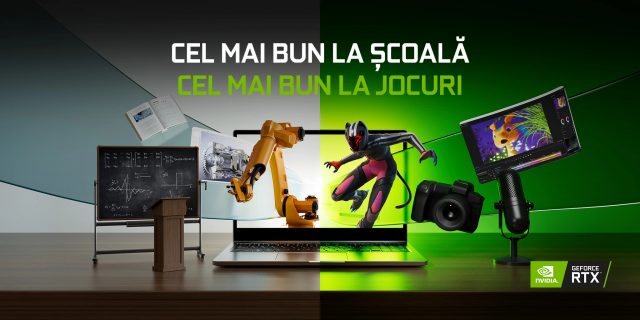 Besides all the school supplies, textbooks, and the rest of the necessities for school, perhaps the most important thing a student needs in 2022 is a high-performance computer. Whether it’s needed for writing papers, searching for course aids or developing the best projects, the speed of a computer can help save time and unlock creativity. Of course, at the end of the day, a computer can also be the entertainment “station” for movies, TV shows, music, or, why not, video games.

So for the most enjoyable experience in all these activities, at home or at the dorm, a gaming laptop equipped with a dedicated graphics card is a must, and NVIDIA’s GeForce RTX 30 series offers the best performance. Here are our recommendations for gaming laptops suitable for school and college students in PC Garage’s Back to School program for several performance and budget thresholds.

The cheapest model in the Back to School campaign is an Acer Nitro 5, which starts at 3,499 lei in a base configuration powerful enough to provide both the speed needed for office applications and even some video editing, but also for eSports games, which are very popular among young people. We’re talking about a GeForce RTX 3050 GPU, based on the Ampere architecture, a 10th generation Intel Core i5 processor, with 8GB RAM and 512GB SSD. The 15.6″ Full HD display uses an IPS panel at 144 Hz, and is especially suited for multiplayer games such as CS:GO, Valorant, DOTA2, LoL, or Fortnite, where the GeForce RTX 3050 will have no problem achieving high framerates.

Those who want a little more gaming performance, however, or who often work with many tabs in the browser and multiple applications in the background, may want to look at a slightly higher performance model, such as the one from GYGABYTE. The G5 GD model integrates an RTX 3050 Ti un, i5-11400H processor (11th generation), with 15GB RAM and 512GB storage. So you’re paving the way for more advanced graphics gaming on higher details, but also better performance for video editing and even CAD software projects at higher performance.

We also found a model for the under €1,000 area that could be in the best-buy area for those who want a high-performance laptop, especially in gaming, without moving into a higher price zone. The MSI Katana GF66 11UE with RTX 3060 on board and 6 GB of video memory (compared to 4 GB on other models), integrating a 15.6″ screen at 144 Hz, the same i5-11400H processor, 16 GB RAM and 512 GB storage, is a very good choice. We’re already entering the performance zone where AAA titles don’t bother a system like this even on very high details, and ray-tracing effects are starting to become a viable option, even without DLSS.

Read:  Google Translate is no longer available in China

Of course, on any of the models already mentioned, you can turn to DLSS in compatible games for a boost in gaming performance, and the RT cores will help with rendering in 3D graphics or ray-traced CAD software for the most realistic images.

But now we enter the above-average performance zone with a laptop model that uses a very powerful GPU: GeForce RTX 3070 and AMD Ryzen 5 5600H processor, 16 GB RAM and 512 GB SSD. Already on such a system, you can consider using professional graphics and photo or video editing software, speeding up the addition of real-time effects is greatly improved. The Legion 5 12ACH6H model targeted benefits from a Full HD IPS display at 165 Hz with G-Sync, only good for providing a smooth gaming experience without tearing artifacts during gameplay. The GeForce RTX 3070 is still a very capable GPU and will remain in the upper performance range on laptops for several years to come. For those with a budget of over €1000, this is a good choice for a computer you can rely on in most use cases.

For the extreme performance area, we have a few models from ASUS that we can recommend from the ROG range. First up, we have one of the newest models on the market, the ROG Strix G15 with Geforce RTX 3070 Ti, which could be ideal for all gamers, regardless of gaming preferences. It includes a top-of-the-line Ryzen 9 6900HX processor, 16GB DDR5 and 1TB SSD, with a QHD display at 165Hz. This combination is ideal for high detail and fluid gameplay in any game, and the ray-tracing effects and DLSS will help in unlocking realistic graphical details and very high framerates.

For productivity, a computer like the ROG Strix G15 with GeForce RTX 3070 Ti can even be useful for making video games at home on a laptop, as it can offer reduced compile times for those writing code, good performance for 3D modeling, and enough power to be able to test games in real time right on your laptop without the need for a powerful desktop.

Of course, there’s also an upper performance threshold for those with almost unlimited budgets who want the highest performance.

Performance taken to the extreme: GeForce RTX 3080 and 3080 Ti laptops for students starting their careers in creative fields

While we found other configurations on offer with the NVIDIA GeForce RTX 3080 and 3080 Ti, the most powerful laptop graphics chips on the market, we chose two laptops also from ASUS for the highest performance range. Students who are not on a budget, studying in creative fields, and who also want the best gaming experience, will be able to confidently turn to the next higher model of the ROG Strix G15, the G513RS version.

This model uses an RTX 3080 with 8GB memory, capable of running anything you throw at it at maximum detail, the Ryzen 9 6900HX processor and 32GB RAM for very complex projects. Storage is on a 1TB SSD. The price jumps over €2,000, but the performance is on par too.

Of course, there’s only one higher performance threshold on laptops at that point, and that’s a GeForce RTX 3080 Ti GPU configuration.

For this price and performance zone we’ve chosen the ROG Strix SCAR 17 SE, a true “monster” of a laptop with a 17.3″ screen. The 16GB GeForce RTX 3080 Ti graphics card offers even more memory than the desktop versions of this card, which stop at 12GB. Otherwise, the configuration continues with the most powerful components available: i9-12950HX processor, 32GB RAM and 4TB SSD (2X2TB in RAID0). This laptop, which jumps from €4,000, can give you the performance of a fully featured desktop in a computer that can be moved anywhere with ease.

The 240Hz QHD display will certainly be put to the test by the powerful hardware in games, and the extra screen real estate will certainly be appreciated by those running more advanced programs to complete complex projects without feeling cluttered or feeling like the system is “getting tired”.

Whether you’re looking for a laptop for a middle or high school student, or a student who needs a high-performance computer to start their career in a creative field, gaming laptops with GeForce RTX 30 graphics cards could be the solution to those frustrating moments of waiting for a slow computer to complete a project, or to enriching moments of relaxation with your favorite games. Of course, all of these laptops are compatible with both NVIDIA’s gaming and Studio drivers, optimized for productivity applications, and you can switch between them as needed to ensure the best user experience in every situation.

You can find the laptops mentioned in this article, as well as other models comparable in specs and performance, by visiting the PC Garage’s Back to School page.