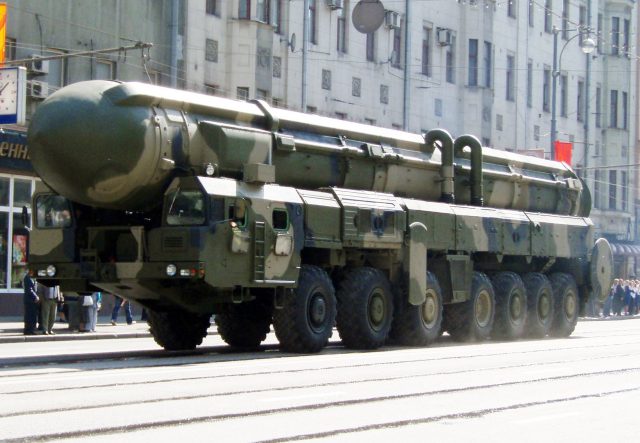 A Russian ballistic missile carrier was involved in a road accident on August 4 in Russia.

Pictures of the incident have been circulating on social media. The military vehicle is a MAZ-7917 model, capable of carrying a Topol intercontinental ballistic missile. It was involved in the accident along with two cars, a Porsche Cayenne and a Lada 2107.

The scene of the collision between an ICBM training vehicle and a car in Russia, August 4, 2022. pic.twitter.com/yM5BsTfw0o

Fortunately, the version of the MAZ-7917 involved in the crash was not carrying a nuclear missile at the time. Instead, it had a tank filled with water and sand to simulate the characteristics of the real vehicle.

The incident occurred near the town of Barnaul, Altai Region, near the border with China and Mongolia. More details on the subject appeared in various Russian publications. Three people were injured. The accident was allegedly caused by the SUV, which pushed the Lada into the transporter.

Read:  Vivo announces the X Fold Plus, its second foldable from 2022

While in the West such vehicles are rarely seen on public roads, in Russia the situation is different. In 2019 a transporter/ballistic missile launcher was photographed on a bumper-to-bumper road.

The RS-12M Topol (NATO: SS-25 Topol) missiles, normally carried by the MAZ-7917, are the first ballistic missile designs, with nuclear warheads, developed by Russia after the fall of the Soviet Union. They entered active service in 1997 and can be launched from nuclear silos or mobile carriers.

Read:  How Starlink helps the elite of the Ukrainian army in the fight against the Russian invaders

The most advanced version of the missile, the RT-2PM, can strike targets up to 11,000 km away. Topol can carry a single nuclear warhead.

According to 19fortyfive, Russia has 87 Topol missiles. Nine of these are located near Barnaul. According to the Nukemap service on Nuclearsecrecy.com, a Topol missile would kill over 1.5 million people if it hit New York now. Many more people would subsequently die from radiation.