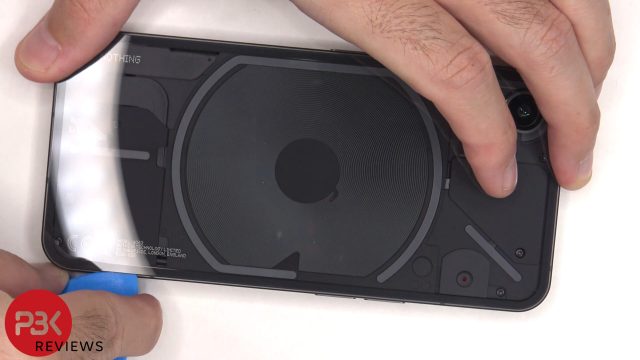 Even though Nothing Phone (1) uses clear glass for the back cover, suggesting that you can see its internal components all the time, the truth is that most of what you actually see of the phone is just covers and other decorative elements. PBK Reviews’ disassembly of the phone, however, shows us what’s really underneath the phone’s case and how easy its components are to change.

Like other phones on the market, the Nothing Phone (1) has a very complex internal design, full of mini-connectors, several electronic boards, a large battery and a few extra novelties. For example, compared to other phones, this model has several LED-lit areas that have to be disassembled separately before getting to the rest of the components.

However, despite being a phone that doesn’t try to hide too much of the components inside, they’re not very easy to swap out. PBK reviews gave it a repairability rating of 3 out of 10, mainly for the difficulty of disassembly operations, the fact that there are no replacement components to buy, but also because to change many of the components you have to undo too many other items inside. The screen in particular is very hard to replace, requiring complete disassembly of the device.

So, despite the fact that Nothing is trying to offer a supposedly more “user friendly” alternative to the traditional company phones on the market, the need to create a phone with premium construction and compact size makes it just as “unfriendly” to repair as the direct competition.

The only thing really out of the ordinary is the way the battery is removed from the phone, with Nothing preferring to forgo the easily removable glue strips in favor of an adhesive wrap around the battery. Considering how hard it was to remove this component in the video, this doesn’t seem like a very good solution.