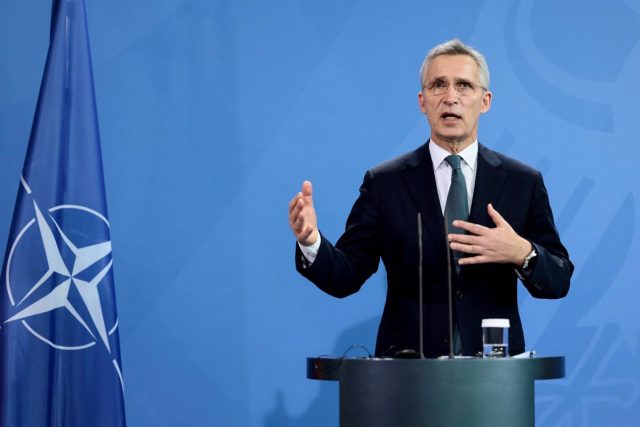 NATO has mobilized military means, including frigates and fighter jets, in recent days to reinforce its presence in Eastern Europe in response to Russia’s threat to Ukraine’s security, the military organization itself reported in a statement.

Within the framework of the increased tension between Kiev and Moscow, several NATO partners have announced the deployment of forces that will reinforce the Atlantic Alliance’s missions on the eastern flank.

“I welcome the additional contribution of NATO forces. NATO will continue to take the necessary measures to protect and defend all allies, including the reinforcement of the eastern flank of the Alliance”, underlined the Secretary General of NATO, Jens Stoltenberg.

Faced with the Russian threat to Ukraine’s security, the Norwegian politician has reiterated that the military organization “will always respond” to any deterioration in the “security environment” and will not give up increasing its collective defense.

In this sense, Spain’s advance of the deployment of the ‘Blas de Lezo’ frigate bound for the Black Sea and the announcement of sending fighter jets to support the air patrol mission, has been joined this weekend by the Danish proposal to send a frigate to the Baltic Sea and reinforce the air patrol mission in Lithuania with four F-16 fighters.

Read:  The dead miners rise to seven after an explosion in a mine in Colombia

According to the balance of the Atlantic Alliance, France has also expressed its willingness to send troops to Romania under the NATO umbrella, while the Netherlands will deploy two F-35 fighters in April to reinforce air patrol tasks in the area. .

To all this is added the leadership of the United States, which has approved several economic and military aid packages to Ukraine in recent weeks and has made clear its intention to strengthen its presence in the region in the face of the rise in hostilities with Moscow.

For weeks, Russia has deployed tens of thousands of troops to the border with Ukraine, raising alarm about a possible invasion after the illegal annexation of Crimea in 2014 and giving support to the separatist regions of Donetsk and Lugansk in the framework of the war. in eastern Ukraine.

The military organization deployed combat battalions, made up of troops from different members under the NATO umbrella, to the Baltic states and Poland in response to the annexation of Crimea in 2014 and later created new aerial surveillance missions in the Black Sea. The latest announcements by the members of the Atlantic Alliance will reinforce these missions already underway as a way to dissuade Russia from a new attack on Ukraine.

Read:  Kremlin rules out general mobilization in the face of Ukrainian counter-offensives

SUPPORT FOR SWEDEN AND FINLAND

This Monday, Stoltenberg met with the foreign ministers of Sweden and Finland, Ann Linde and Peka Haavisto, to whom he reiterated NATO’s support in the face of the Russian threat and left the door open for future membership.

Stoltenberg has revealed that in full tension with Russia, the military organization maintains close cooperation with Sweden and Finland with which they share information about the Ukrainian crisis.

Finland and Sweden are countries indirectly affected by the security requirements of Russia, which demands that NATO does not expand towards its borders. Stockholm and Helsinki have been claiming the sovereignty of their countries to freely decide their foreign policy and their alliances and although joining NATO is not on the table, as Linde has reiterated, their relationship with the military organization is close and they participate in missions and meetings of the Atlantic Alliance.

At a press conference, NATO’s political chief has indicated that the organization is considering increasing its presence in Eastern Europe by reinforcing combat battalions. “These deployments are proportionate and in line with international commitments, they reinforce everyone’s security,” he insisted.