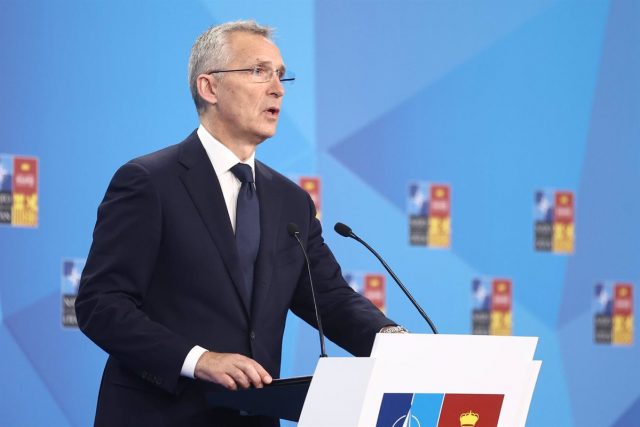 NATO Secretary General Jens Stoltenberg on Wednesday urged Serbia and Kosovo to avoid tensions and potential escalation following violence in northern Kosovo in late July over border blockades and recalled that its KFOR mission is ready to intervene and may eventually deploy to ensure stability in the area.

At a press conference from NATO headquarters, Stoltenberg called on the parties to show responsibility and to show restraint in the area, after indicating that, if stability is put at risk, NATO is ready to “take any measures to secure the environment and ensure the movement of all communities in Kosovo.”

“While the situation on the ground has improved, it is the responsibility of all parties, particularly officials in Belgrade and Pristina, to prevent it from escalating again. I call on all sides to show restraint and avoid violence,” NATO’s political chief said after separate talks with Serbian President Aleksander Vucic and Kosovar Prime Minister Albin Kurti.

The former Norwegian prime minister has stressed that NATO is a “neutral actor” in the area and the purpose of KFOR is to ensure the security of all communities, “also the Serbian ones.” “We are not going to do anything that would involve us in the conflict,” he asserted.

That said, he has warned that the Atlantic Alliance is ready to intervene if such a situation were to arise. “If necessary we will move force, we will increase our presence. We have already increased our presence in the north and we will act if needed, always in a proportionate manner,” he said, stressing that the objective is to reduce tensions and guarantee the security of all communities.

Read:  The Ukrainian Prosecutor's Office denounces at least 200 dead children and 360 injured since the beginning of the invasion

In any case Stoltenberg has exposed the “significant” presence of NATO in Kosovo, where it has a force of almost 4,000 troops. “The presence in itself already serves to stabilize and prevent an escalation or any kind of conflict,” he reiterated.

A few weeks ago there were tensions over the blockades of border crossings by the Serbian community in protest against the application of a law — already postponed for a month — by which people from Serbia entering Kosovo would have to hand over their identity documents, which would be replaced by others issued in Pristina.

Vucic and Kurti’s meeting with Stoltenberg comes on the eve of the dialogue in Brussels hosted by EU High Representative for Foreign Policy Josep Borrell, which will seek to channel the situation over border tensions and get Belgrade and Pristina to commit to talks.

At a press conference, Kurti has denounced that organized gangs were involved in the border blockades and that is why if there are two sides in this conflict, “on one side there are police forces of a democratic state of Kosovo and on the other illegal structures of Serbia that are criminal gangs that erect barricades.”

“We must not lose the moral center. This means that there must be zero tolerance against organized crime,” he said, defending the police raids in northern Kosovo against organizations, which the Serbian side sees as harassment against Serb communities in Kosovo.

On Thursday’s talks, NATO’s top political official has defended that dialogue is the way to resolve differences in the region and that it is the platform to find solutions that respect all communities in Serbia and Kosovo.

Read:  Fighting in Tripoli decreases in intensity after leaving at least 23 dead and 140 wounded

In this sense, he has asked both leaders to come with a “constructive” air, “show flexibility” and “participate in good faith”, to which Vucic has responded that the negotiations are “difficult” because Serbs and Kosovars do not agree “on practically nothing”.

In any case, the Serbian leader has marked the path of dialogue and reaching compromises as the way forward, after rejecting Pristina’s accusations of being under Russian influence and representing a threat to the region in the context of the war in Ukraine.

“What we need is dialogue, negotiation, compromises and not blackmail against Serbia, on how it has to act or what it has to recognize,” Vucic said, who regretted that the situation in Ukraine is being used to attack Belgrade.

The issue has come up again in Kurti’s subsequent press conference, in which the Kosovar leader has alienated Pristina’s interests and principles with those of NATO in the face of the invasion of Ukraine and called to be “vigilant” against the “destructive approach of the northern neighbor” in the framework of the “Russian agenda for Europe and the Balkans.”

Serbia, a historical ally of Moscow, is the only Balkan country that has not joined the European sanctions over the invasion of Ukraine, although the country has denounced the Russian military attack in votes at the United Nations.