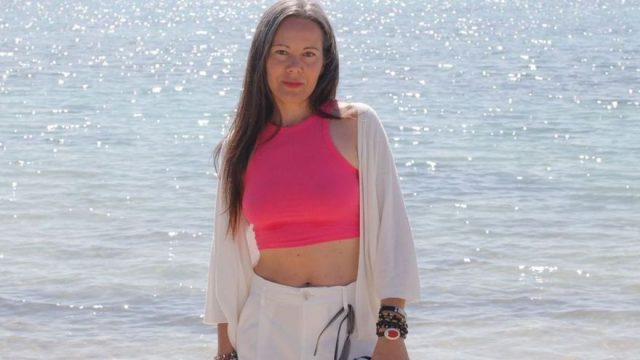 Nuria Roig Ribas coexists or, rather, “survive” the multiple chemical sensitivity (MDS), a syndrome that causes your body to react to certain doses of everyday chemicals. The list of products you do not tolerate is very long: “Paints, varnishes, gasoline, air fresheners, bleach, detergents, softeners, gels, perfumes, nail polish, dyes, hair lacquers…”. To avoid as much as possible exposure to all these agents, the The mask has long since become your indispensable accessory, long before the covid made an appearance. Every day he uses one with an active carbon filter and on some occasions, such as when he travels, he protects himself with a gas and vapor safety mask like those worn by painters. He is well aware that his disease has no cure, at the moment, so the only way left is to try to alleviate the symptoms and thus try to improve his quality of life.

Some time ago this Ibizan chose to wear gray hair and to throw personal hygiene and cleaning products in the trash. He had no choice if he wanted to improve his health. Now clean your house and your body exclusively with three elements: “Baking soda, apple cider vinegar and hydrogen peroxide”. He likes to see the glass half full, so he often says that he does not have a disease, but “superpowers to detect everything that is bad for health”.

It is common for people with MCS to suffer from other pathologies encompassed within the so-called Central Sensitivity Syndromes (CSS) and Nuria Roig is no exception. In her case, as she says herself, has the “complete pack”: multiple chemical sensitivity, fibromyalgia, myalgic encephalomyelitis (also known as chronic fatigue syndrome) and also, to a lesser extent, electrohypersensitivity. All these ailments, which are chronic, cause him, he explains, “neurological, cognitive, digestive and dermatological symptoms”.

“My life is full of limitations, it’s a probation“, laments Roig, who has seen how her existence changed radically in a very short time. Until four years ago she was an athletic and hyperactive woman, who in addition to working as a social educator and raising her two children, was involved in “a thousand things “. Now he gets up every day thinking about what he is going to invest his “5% battery” because due to these ailments and, specifically, myalgic encephalomyelitis, has “intolerance to physical and cognitive exertion”. “I have to establish priorities, for me the first is my children, although at this point they are the ones who take care of me,” she says. Sometimes he is not even able to get out of bed, other times he has the energy to take a shower, eat and little else. Speaking of food, he also has an intolerance to many foods, in fact, his diet is reduced to a dozen products, which must be “organic and without pesticides”. Also, he can’t take no medicationexcept antihistamines.

Read:  Eyes do not retire

“My day to day consists of overcoming obstaclesaccept my limitations and manage well the little energy I have and thus manage to survive in a minimally dignified way”, says Roig with a resigned tone. Apart from the mental and physical fatigue caused by these syndromes, he also has to deal with the misunderstanding that exists around them, since their effects are not obvious. “We lose social and work life, friends and family and our economy is also affected,” he complains.

According to Elena Martínez-Esparza, social educator at Affares (Association of Fibromyalgia, Chronic Fatigue Syndrome, Chemical Sensitivity, Electromagnetic Sensitivity and Rheumatic Diseases of Ibiza and Formentera), although it has not been proven, there could be a genetic predisposition to suffer from MCS, which It affects more women than men. In many cases, she explains, this pathology is associated with a chemical overexposure.

Nuria Roig began to detect the first signs that something was wrong four years ago, as a result of “a chemical submission attempt that occurred in the workplace with scopolamine (burundanga) or GHB”. “I noticed a lot of sleep and tachycardia and I was not able to express myself and tell what was happening to me. My blood pressure increased and I vomited. I ended up in the emergency room,” he recounts. After a while she started experiencing symptoms that he didn’t know what to blame, like vision loss, orientation difficulties, physical tiredness, lack of concentration, migraines and intolerance to certain foods, among others. Little by little his social life began to reduce and then his work life.

Read:  Camelpox virus, the lethal disease that could spread at the World Cup in Qatar

“It was unable to concentrate working and what I did, at first, was take my work home so that it wouldn’t accumulate, then I began to limit my activities with my family and friends and then every time I had to travel or make an overexertion at work I had to take three days off or vacation because I was exhausted. There came a time when I had to ask to leave, it was in 2019, “says this Ibizan who has worked for 23 years as a social educator, first in the Ibiza Town Hall, and then in the Govern.

Last April, “after three years of struggle”, the National Social Security Institute recognized “permanent disability”. Before obtaining work incapacity, contrary to what is usual, the Government recognized him “a handicap and a degree 1 dependency“, so it has a teleassistance service.

All the medical professionals that Nuria Roig went to, and there were many of them, quickly detected that she suffered from myalgic encephalomyelitis and fibromyalgia and one of them, the digestive specialist, suggested that she could also suffer from MCS. The definitive diagnosis was given in December 2019, after being admitted to the Can Misses Hospital, in Ibiza, weighing 42 kilos, with an inflamed esophagus and a liver tumor, which turned out to be benign. She confirmed it in February 2020 by going to private healthcare in Barcelona.

Before having the definitive diagnosis, Roig turned to the professionals at Affares, who explained everything that could affect his health and how he could adapt to his new situation, as well as teaching him to accept his limitations. “It’s like being born again and having to learn to live again. You need help for everything,” says this “vocational” social educator. Nuria Roig asks “collaboration and understanding” to society, before finishing a talk that takes place in one of the few places where he feels good, the beach, “his medicine”, as long as no one is by his side applying sun cream.