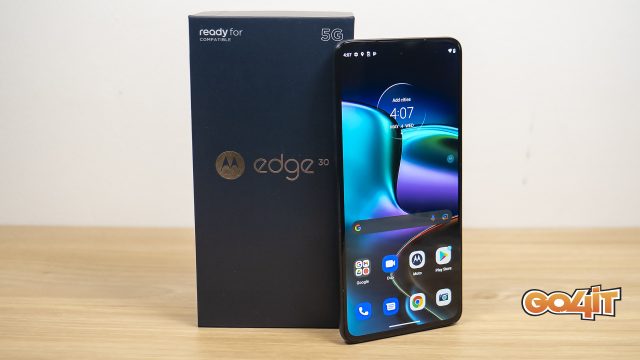 The Motorola brand seems to be more concerned with the appearance of the Edge 30 than with the performance of the phone, as it was keen to mention that this is the thinnest phone at the time of the announcement. However, it seems that this is one of the best equipped devices in its price category, offering a very fast screen, decent cameras and above average performance in the market.

Edge 30 comes with a “slim” design

Indeed, the design of the Motorola Edge 30 is one of the advantages of this model. Although I can’t say I’m a fan of thin and light phones, there are definitely enough users who want such models. The Edge 30 stands out by the fact that it measures only 6.7mm in thickness, but the camera island makes this phone about as thick as other models once you put a cover to bring everything level. In fact, the phone includes a case in the package, which comes pre-installed at the factory. This is an ordinary silicone case, but it is a detail that is starting to disappear from the boxes of other phones in this price area. I noticed the same in the case of the charger, which recently disappeared from the box of Samsung models in the mid-range. However, the Motorola Edge 30 comes with a 33W charger, along with a charging cable for it.

Being a mid-range phone, Motorola has chosen plastic as the predominant material in the construction of the Edge 30, but the overall look of the phone is very pleasing. The matte plastic on the back gives the impression that it is glass, and its color changes from gray to blue depending on the ambient light. I also appreciated the fact that the phone is very “flat”, which ensures a better grip in the hand. The only thing missing from this model is a headphone jack and a card slot, but we have become accustomed to seeing such shortcomings even in the average area lately. Unlike the Edge 30 Pro, previously tested, the Edge 30 has the physical buttons positioned “correctly”, about 1/3 of the height of the phone, not up. Also, the Power button no longer has a fingerprint sensor.

The screen is one of the most “fluid” on the market

And the screen is an advantage of the Motorola Edge 30 over other models on the market. Unlike other models that come with screens at 90, or even 120 Hz, the Edge 30 comes with an AMOLED panel at 144 Hz, something I haven’t seen much in this price area. In general, such screens appear on gaming phones with top specifications. The screen is protected with Gorilla Glass 3, and Motorola does not include a foil in the package, so a foil will probably be needed to ensure durability over time. However, the OLED panel is very bright, above average, being legible even in bright light. Motorola sets the screen to a “saturated” mode at the factory, but there is also a “natural” mode, and it is compatible with HDR10 + content. I have now reached a point where average phones can offer very good screens, and the one on Motorola is one of the best in its category, being suitable even for gaming at high framerates. The difference between 120 and 144 Hz is not very big in use, but I felt a difference compared to the previously tested Galaxy A53 model. Probably because that model slowed down even in the menus, while the Motorola Edge 30 performed a little better from this point of view.

Read:  Google Search, tested with a dynamic color interface, inspired by the Material You theme in Android 12

The optical fingerprint sensor has been moved to the screen. It is located a little lower, sometimes difficult to reach from the first attempt correctly. As long as you put your whole finger on the sensor, it will unlock the phone every time, without errors.

And the reason why the Motorola model is more “fluid” is the processor chosen. While Samsung went in this price range on a proprietary Exynos solution, which offers about half the performance of a flagship, Motorola went hand in hand with Qualcomm, with the Snapdragon 778G + chipset, a 6nm octa-core model with a GPU Adreno 642L, a chip that we also find on mid-range gaming phones. Its performance is still far from that of a Snapdragon 8 Gen 1 phone, but slightly closer than the Samsung solution. And the performance of this model is also seen in tests, where the Motorola Edge 30 achieves scores that we saw on top-of-the-range models just a few years ago. This will ensure a better longevity of this model and better performance both in everyday applications, but also in more advanced games or applications, such as photo or video editing. Given the popularity of TikTok and Reels, it would not be out of the ordinary for smartphone users to edit videos on their phones, and the Edge 30 does not seem to bother with this.

With such a thin profile, it was clear that Motorola had given up something to ensure this design. Autonomy is the one that suffers, requiring a 4,020 mAh battery for such a limited space. With a 144 Hz display and a fairly high-performance processor, the Motorola Edge 30 offers no more than a day of normal use with 4-6 hours of screen on. However, charging at 33W helps, being able to fully charge the battery in less than an hour. In the software area, Motorola always has an advantage over the competition, for users who want a software experience that is as “personalized” as possible. That’s because it uses Google’s Android interface, with minor modifications to adapt the software to its hardware. In the first setup, you even have the option to choose between navigation buttons and the modern gesture navigation bar, and users have access to methods for customizing the interface, if they wish.

Bloatware is kept to a minimum rarely seen lately, as Motorola relies on applications from Google without duplicating them. The company has just added a few complementary applications of its own, which provide access to dedicated features developed for its phones, such as Ready For, the interface that connects the phone to a screen to turn it into a media player, gaming device or computer. desktop productivity. The only software disadvantage would be the support period. Motorola offers Edge models three years of security updates and two years of system updates, so it will receive a maximum of Android 14, being already equipped with Android 12.

The camera is unusual, but above average

Motorola has had camera problems for several years, which it doesn’t seem to solve even on top models. At least from Edge 30 we don’t have flagship claims, so in its price area it handles quite well, but it still suffers from the competition. The phone integrates three cameras, a 50 megapixel wide, an ultra-wide 50 megapixel camera and a 2 megapixel depth camera. Unlike other models in this price range, however, the Motorola Edge 30 can also take macro photos using the ultra-wide camera. But I noticed something unusual about this model. For the first time, it seems to me that photos taken with the ultra-wide “secondary” camera are better than those taken with the main camera. This is mainly due to a better dynamic range. Under similar conditions, the “main” wide chamber overexposes the frames, having “burned” portions, especially in the sky on sunny days. The ultra-wide camera handles this much better. However, the details are better on the wide camera, as the ultra-wide camera becomes a bit “soft”, especially towards the edges. The results for macro shooting, on the other hand, are decent, proving once again that a dedicated camera is not required for this function.

At night, however, Motorola only allows shooting with the main camera, and the results are not impressive. The night mode algorithm processes photos too aggressively, turning night into day and blurring details through an image noise reduction algorithm. Thus, these images are not representative of the actual atmosphere in which they were made.

Overall, the Motorola Edge 30’s camera is good, but it also has advantages and disadvantages over other models in the market in its price range.

Motorola Edge 30 is a good alternative to the 2,000 lei models from Samsung, Xiaomi or Oppo. Each model comes with its own advantages, and the Edge 30 comes with a nice design, a very fast screen and a Google interface with few customizations. The camera is average, while software support and autonomy could be the biggest disadvantages of this model. The phone is currently on the market, but low-cost deals are already starting to appear. With a few hundred lei cut from the standard price, the Edge 30 is a good recommendation for those who want a well-developed mid-range phone, but far from being “perfect”.