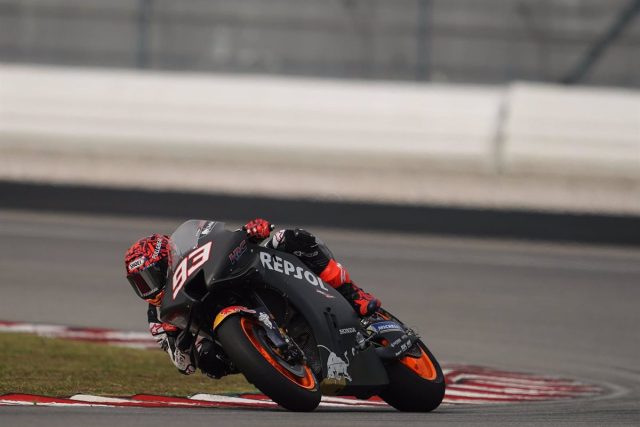 The Spanish MotoGP rider Marc Márquez (Repsol Honda) has acknowledged that he has “suffered a bit physically” during the pre-season test at the Sepang International Circuit, in which he closed the second day this Sunday with eighth place, although he explained that they have managed to understand “better the front” of the bike.

“I am happy for these two days in Sepang, but also tired! It is true that it is very positive for us to be here, although I have suffered a bit physically. When I push with the bike, the speed is there and we are learning a lot about this bike after trying some important things,” he said in statements provided by his team.

In addition, the one from Cervera stated that the bike “has potential”. “Today we have better understood the front end after some changes we have made. Pol and Álex have been fast too, which is positive. I have done some laps on the wet track and I have also felt good”, he concluded.

For his part, his teammate, Pol Espargaró, was “quite happy” with how the test went. “Of course it would have been nice to do more laps, but the weather is what it is,” he said about the suspension of the day a few hours earlier than expected due to the appearance of rain.

“We are close to the front with a new bike and that is positive. There is still some time to find more rhythm, I made a small mistake on my fastest lap, but on the longer runs we are working well. It will be important to improve the speed one lap because we have seen how tight Saturdays are in MotoGP. We have been able to gather good data here and now it’s time to work hard before the next test”, concluded the man from Granollers, tenth this Sunday.