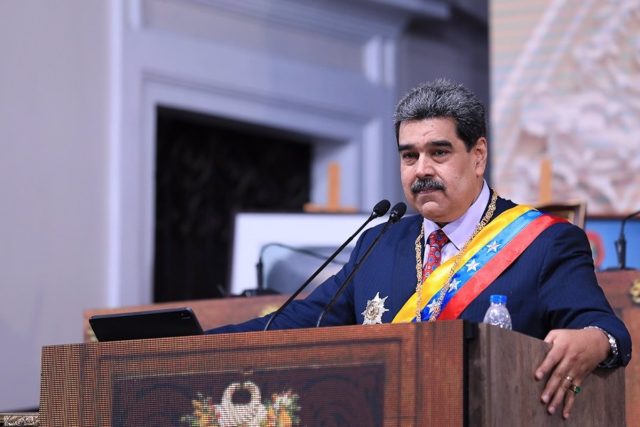 The president of Venezuela, Nicolás Maduro, has accused the Spanish Crown on Tuesday of covering up genocides against indigenous people and Africans that occurred during the Spanish conquest of America and has called for the condemnation of these “crimes”.

“They say that they came to civilize and culturalize us, that we were a kind of barbarian. They say it, it is the ideology of the right, the Spanish Crown, the ideology of empires,” Maduro said at a press conference in Caracas broadcast on the state television channel.

Thus, he has emphasized that “the Crown of Spain still denies the crimes of mass genocide, crimes against humanity, the razing of our original peoples.”

The president has affirmed that when the Spanish empire arrived in America, it is estimated that there were about 100 million inhabitants of the original peoples, and a century later there were only about 10 million left.

Read:  Xi Jinping, one step closer to consolidating his power at a challenging time for China

“It has always been said that almost 100 million grandfathers and grandmothers came out of mother Africa, enslaved, and only 50 million arrived alive on the shores of America. When the Spanish empire arrived, there were an estimated 100 million indigenous inhabitants and barely a century there were only 10 million left. What is that called?” asked the president of Venezuela.

Maduro indicated in October that Spain had to ask “forgiveness” from the peoples of Latin America and the Caribbean for the “crimes” of the conquest of America, after Pope Francis or the president of Mexico, Andrés Manuel López Obrador, expressed in this same line.

ABOUT THE SUMMIT OF THE AMERICAS

On the other hand, Maduro has addressed the Latin American countries in favor of a union: “Today from Venezuela we say to the people of Ecuador, to the South American peoples, the great times of union are before us,” he said.

Read:  Johnson calls on Tories to support "any candidate but Sunak" in race to elect his successor