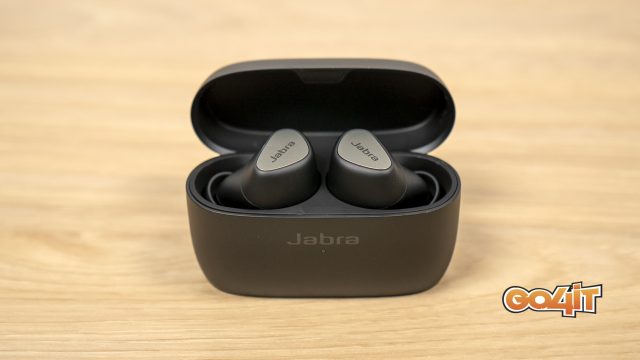 All the tech companies have been releasing true wireless headphones for a few years now, but few models really stand out with anything. Jabra has always been a major player in this market, being a company that deals exclusively in making audio devices, and its previous models have managed to strike a good balance between price, quality and performance. The new Jabra Elite 5 attempts to do the same, offering pretty much everything you need from a pair of headphones in this genre, at a price that isn’t prohibitive for the general public.

The Jabra Elite 5 headphones are not very different in terms of design from the company’s other models. They come in a very attractive box in which the headphones, accessories and instructions for use are nicely organized, giving users all the information they need, right out of the box. The package is also made from recyclable materials. The charging box is made of black plastic with a matte texture that is pleasant to the touch and very light. The shape isn’t ideal, but the earphones are lightweight and easy to keep in a pocket. Being a matte box, you don’t even have to worry about scratching them. The charging box has a USB-C port on the back and also allows for Qi wireless charging through the bottom.

The earbuds themselves are small in size and have an ergonomic shape that molds perfectly to the user’s ear. Being in-ear headphones, they don’t need to be secured in the ear otherwise and with the right silicone earplugs, they remain fixed in the ear even during sporting activities. Each individual headset has a physical button on the outside, as well as small status LEDs that help connect the place. The overall design of the headset is typical of Jabra models from the last few years. They are extremely lightweight and promise high battery life despite their size.

Unlike many other headsets that don’t allow much configuration, Jabra has made a very well-organized mobile app. It offers quick access to configure to your liking, whether it’s changing the audio profile, choosing one of the presets, or changing the features available on the headset.

You can configure everything from the intensity of ambient noise cancellation to the functions available on the outer buttons of the headphones for different situations: for music playback or calls. So there are many possible combinations of shortcuts, as each headset can memorise its own shortcuts, available depending on the use case. And the main menu allows you to add or remove shortcuts to specific settings and reorder them as you wish.

Read:  If you have invested in cryptocurrencies, stay away from these applications!

The Jabra Sound+ app’s interface, however, is beyond anything we’ve come across in recent years, with streamlined menus that are very well organized and a nice design. Its advantage is that you can sort out any configuration very quickly, and then enjoy using the headphones. The app also includes relaxing sounds, such as white sounds or nature sounds. In general though, after the first setup, you won’t need it again except to change certain functions and update firmware.

While the Jabra Elite 5 headphones look great in terms of presentation and setup, I was also pleased that these headphones managed to impress me in actual use. While I’m not necessarily a fan of in-ear headphones, I found the Elite 5 to be very comfortable in use, sometimes forgetting I was wearing them. The physical buttons on the outside seem to me to be a strength of this model, as often when I had to use exclusively headphones with touch surfaces, accidental presses led to accidental stops or starts of playback or activation of functions I didn’t want at the time. Since a physical button press is required, I had no such problems on the Jabra Elite 5.

Although the Elite 5 headphones use only 6mm speakers, compared to other pairs of headphones with larger speakers, I didn’t notice a downside to them when it comes to performance. Sound quality proved to be very good at any volume level, and surprisingly, these headphones have more bass than I had originally expected. However, it may be necessary to choose an amplified bass profile, as the headphones come with a neutral sound profile by default. As chance would have it, I was flying on an airplane during my headset testing, so I had the opportunity to put the ANC function to the test. This works very well to almost completely eliminate very repetitive sounds, such as the sound of the aircraft engine. So I had a very comfortable flight in terms of sound, even at times when I wasn’t playing music through my headphones. Of course, it won’t completely eliminate all sounds, certain large noises or people’s voices are not completely muffled. Which can be a good thing, as I could identify the crew’s messages through the airplane speakers.

And when I wanted to hear what people were saying around me, I used the HearThrough feature, the “ambient” mode on the Jabra Elite 5. Sound from around me enters the headset through the six microphones and is played back alongside what you’re listening to. It’s a useful feature for hearing what’s going on around you without having to take the headphones off. And switching between ANC and HearThrough is done with a single button press. A very useful feature for those who use Spotify in particular is Spotify Tap, which can be set up as a shortcut on one of the headphones. Once activated with a tap or two, music from Spotify starts playing directly, using one of your favourite playlists. A second Spotify Tap activation moves playback to the next playlist. I found it a useful feature, and I actually used it.

I tested the headphones on the iPhone, where there’s no Siri integration or quick pairing features, but on Android you get Alexa and Google Assistant as well as FastPair. And there’s even fast pairing to Windows computers via Swift Pair. Given the weather over the last few days, I’ve had the opportunity to test some other important features. The Jabra Elite 5 earphones are also water and dust resistant to IP55 standard, so they are definitely suitable for outdoor activities and sports training. You shouldn’t worry if you get caught in the rain with them in your ears, as I’ve had that happen to me and they’ve survived splashes of water with no problems. It’s important to keep in mind that only the earphones are durable, not the box. If you register your headphones in the app, you can also get a two-year warranty for damage that might occur from exposure to water and dust, suggesting that Jabra doesn’t expect these items to be problematic for the Elite 5.

Finally, we have battery life, stated at 7 hours of playback with ANC on and 9 hours with ANC off. I can confirm that these statements are very close to the truth, as on a two hour flight with ANC on all the time, the headset still had around 80% of the autonomy. The box charges them fully about three times, so you can sometimes use the headphones for more than a week between charges, depending on how often you use them and whether you use the ANC.

The Jabra Elite 5 is an easy headset to recommend: it benefits from a comfortable design, promises and delivers above-market average battery life, and offers access to enough features and configurations to mold to many users’ usage styles. While there are better-performing headsets, in theory, including from Jabra, the Elite 5 is the pair that I find offers a near-perfect balance of high performance and high-end features in a package that isn’t overly expensive.