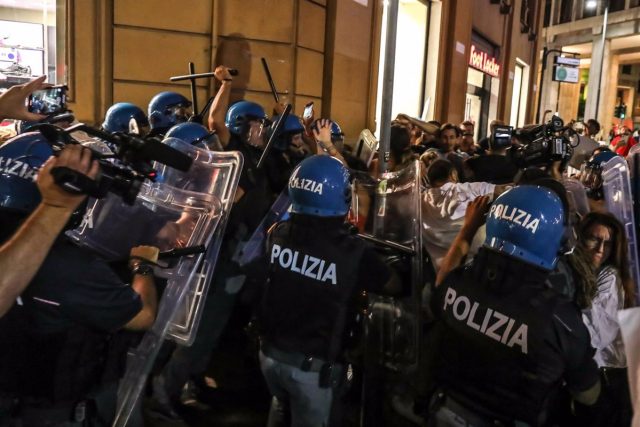 Police had to intervene this Tuesday night to contain half a hundred demonstrators who intended to break into a rally of the far-right leader Giorgia Meloni held in Palermo (south), a few days before a parliamentary election in which the conservative forces are favorites.

The Police have told that “the meeting of the Brothers of Italy was going on normally” until a “group of 50 people from antagonistic groups” pretended to arrive at the place where the rally was being held, the Piazza Politeama, “with the intention of disturbing the electoral event.”

‘Before pig than fascist’ or ‘On my body I decide’ were some of the proclamations of these people who gathered to protest against the presence of Meloni, declared follower of the dictator Benito Mussolini, who starts as the main favorite to take the elections scheduled for this September 25.

The clash between the agents and Meloni’s detractors ended with the arrest of a demonstrator for throwing a bottle at the police and with a journalist of ‘La Repubblica’ injured after being beaten by the uniformed, as reported by the newspaper itself.

The polls give as favorite Meloni, president of Brothers of Italy, whose speech has left former Prime Minister Silvio Berlusconi as the most moderate conservative option.

Southern Italy has become one of the most hotly contested regions in an election in which the Five Star Movement (M5S) hopes to be able to get good results to the detriment of a right-wing that could govern with a coalition formed by Meloni and Berlusconi and former Interior Minister Matteo Salvini.