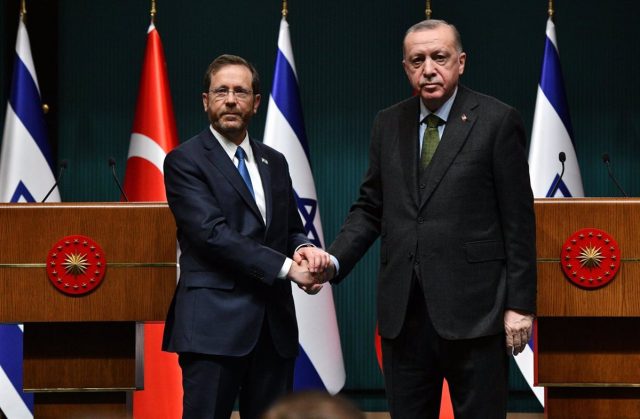 “We will continue to defend the rights of Palestine, Jerusalem and Gaza,” Turkish foreign minister said

Herzog praises decision, says it will promote economic relations, tourism and friendship between Israel and Turkey

Israel has announced the full restoration of diplomatic relations with Turkey by appointing two ambassadors after a break of more than ten years that was triggered by the death in 2010 of ten activists in the Israeli assault on the ship ‘Mavi Marmara’, which was part of the so-called Freedom Flotilla and was trying to circumvent the blockade imposed against the Gaza Strip.

“The renewal of relations with Turkey is an important asset for regional stability and economically very important for the citizens of Israel. We will continue to act and strengthen Israel’s international status in the world,” Israeli Prime Minister Yair Lapid said in a statement.

In this regard, Lapid has reported that following a conversation between Foreign Ministry Director General Alon Ushpiz and Turkey’s Deputy Ambassador Sadat Onal, it has been decided to “relieve the level of relations to full diplomatic representation.”

Thus, there will be the reinstatement of ambassadors and consuls general of both countries. “Improving relations will help deepen the relationship between the two nations, increase economic, trade and tourism ties, and will also contribute to strengthening regional stability,” he added.

Relations between Israel and Turkey were severed in 2010, after the Israeli Navy killed several pro-Palestinian Turkish activists by provoking the naval blockade of the Gaza Strip.

In June 2016, the two countries assured that they would normalize relations, a rapprochement spurred by possible gas deals and mutual fears over security risk in the Middle East.

However, despite the two countries reaching an agreement in 2016 to resume relations, ties were not fully restored and they even expelled their ambassadors in 2018 over a crackdown by Israeli security forces on thousands of Palestinian protesters in the Gaza Strip.

The rapprochement comes after last March, the presidents of Israel and Turkey, Isaac Herzog and Recep Tayyip Erdogan, respectively, assured that the former’s official visit to Ankara, the first in more than ten years to the country by an Israeli leader, was a “turning point” between the nations.

“The restoration of diplomatic relations is a continuation of the positive trend in the development of relations over the past year, since the visit of the country’s president, Isaac Herzog, to Ankara and the mutual visits of the foreign ministers to Jerusalem and Ankara,” Lapid recalled Wednesday.

Herzog also praised, through a message on his official Twitter profile, “the renewal of full diplomatic relations with Turkey,” which is “an important step forward” that “will foster greater economic relations, mutual tourism and friendship between the Israeli and Turkish peoples.”

For his part, Turkish Foreign Minister Mevlut Cavusoglu said Wednesday during a joint press conference with Kyrgyz Foreign Minister Ceenbek Kulubayev that, like Israel, they have decided to appoint an ambassador to Israel.

With these new appointments inaugurating a new stage in relations between the two countries, Turkey will be able to report directly on its concerns in the region at the ambassadorial level, Cavusoglu explained, as reported by the Turkish daily ‘T24’.

“As we always say, we will continue to defend the rights of Palestine, Jerusalem and Gaza. It will also be important to convey our messages on this issue to Tel Aviv at the ambassadorial level,” he stressed, as reported by the Anatolia news agency.

Cavusoglu also favored a rapprochement with Israel in May, when he came to the country and assured that the “normalization” of bilateral relations would have “a positive impact” on the resolution of the Israeli-Palestinian conflict.

“We believe that the normalization of our ties will have a positive impact on the resolution of the conflict,” he stressed during a joint press conference with Lapid, at an event in which he emphasized that the two-state solution “is the only one for a lasting peace.”